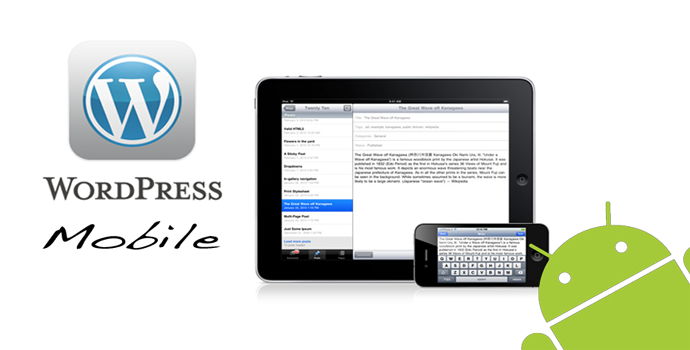 Mobile browsing is becoming increasingly more important to internet users and businesses, and for those who want to reach more viewers, you not only need to make your sites responsive, but also have the ability to update and post on the fly.

Some of the apps listed below tap directly into your WordPress blog with a login and password, while others share to your blog via the WordPress mobile applications. Therefore, it’s best to start with WordPress mobile directly on your device.

Essentially, WordPress mobile is the same application made available for two platforms; IOS and Android.

http://ios.wordpress.org/
The iPad is a fantastic device with which to update your blog, and the WordPress for IOS app makes it a great user experience. You have the following features available to use:

The WordPress IOS functionality is the same regardless of IOS device, so your cell phone will feature the same list of options mentioned above; and while updating from your iPhone or iPod Touch is possible, it is much harder to do.

The cell keyboard is a bit small to write Odyssey length epic posts, in my opinion, but if you’re a texting whiz you might have an easier time than those of us with fat thumbs. 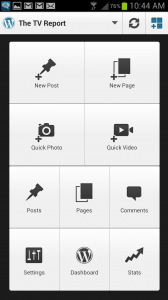 http://android.wordpress.org/
With the entry of Android into mobile market, both tablets and cell phones have become more affordable, and using WordPress for Android, blogging on this mobile platform is fun too.

Updating your blog from a 7” tablet is a breeze, with the very same functionality and look as the IOS application for iPad. If you own a larger cell phone, like the Sumsung Galaxy S3, updating from your cell phone is just as easy, and a much more friendly experience than using the iPhone or Touch – mainly due to the larger screen size.

The one disadvantage to blogging on the Android is not related to user-interface or functionality – it’s a pure lack of application availability. There are few usable word processing apps, even fewer which allow you to work with images, and still fewer apps which will share to the WordPress application on your Android device.

Outside of WordPress for mobile, there are several apps which allow editing on your device and syncing with your WordPress blog. 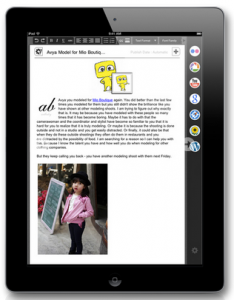 http://blogsyapp.com/
Blogsy is probably the most well-known blogging application for IOS and while we only tested it with WordPress, it boasts and impressive list of blogging platforms with which it syncs including:

Blogsy featured drag and drop editing and a system panel sidebar that allows access to sites which interact well with blogging.

Another cool feature of Blogsy comes not from the app itself, but the app’s website in the form of tutorial videos. The Blogsy How-To web page shows you how to do just about everything you need to interact with the application and sync with WordPress.

http://blogpressapp.com
BlogPress started as an iPhone app and was recently introduced for iPad. The interface is clean and easy to use and allows syncing with the same list of blog platforms as Blogsy, plus the following additional blogging programs:

BlogWriter exists only for the iPhone and iPod Touch, and has two versions – the standard app and a lite version, which does not allow photo editing or uploading.

It also doesn’t work with nearly as many platforms as the first two apps, but costs a few dollars less to own. The lite version is free from the app store.

Technically, Epistle is a markdown editor for Android. If you’re not familiar with markdown, I suggest reading the article Perfect Post Box Formatting with Markdown Editors.

In this capacity, the app works fantastically well. Epistle has a clean interface without most of the bells and whistles you see in the IOS apps, and it doesn’t allow image editing or uploading.

However, it plays extremely well with WordPress, and using this app you can create posts and make them live on your blog in seconds.

If you are a text block poster without much flair and imagery, Epistle is a good app for you. But if you need photo uploading or editing features too, you’ll have to stick with WordPress directly.

IOS and Android WordPress apps help you break free from your desktop and post updates while on the road. Look for more apps to be added soon as mobile browsing becomes even more popular.

And don’t forget to leave us a note below in the comments with your favorite mobile WordPress app.