The Top 250 Alexa Sites That Actually Use WordPress

WordPress has blown past its competition in the CMS space in the past five years, and most readers will be familiar with the statistic that it now powers nearly a quarter of the modern web.

The platform is unlikely to plateau at the 25% mark either. WordPress co-founder Matt Mullenweg is on record as saying the next goal is 50%+ market share and, while that may be a stretch goal, it certainly can’t be ruled out as a potentially achievable long-term target.

But just jow many of the truly big beasts in the online jungle are currently relying on WordPress to power their sites?

We decided to break down the top 250 Alexa web properties with a view to answering that very question.

But before we get into the results, let’s quickly go over where WordPress currently stands in the grand scheme of online things and what type of competition it’s facing.

WordPress did not arrive into the world looking like a piece of software that was going to democratize web publishing or power any significant percentage of online traffic. As a fork of a largely defunct, obscure blogging platform back in 2003, initial growth was not exactly meteoric, but the project soon started to gain real momentum.

By 2010 the platform was well and truly established, with over 10% of the market share. A slew of significant releases since then has cemented WordPress’ position as a major player in the online world and moved it to the top of the CMS tree.

Matt Mullenweg’s recent installation as CEO of Automattic seems to have added momentum to both WordPress.com and WordPress.org in the past year, and he has given a number of interviews where that target of 50% of market share has been mentioned.

WordPress does not have the field to itself, however. Its rise has also been accompanied by the arrival of a slew of well-funded competitors in the last five years – in addition to the emergence of new technologies – so it will be interesting to see if the momentum achieved thus far can be maintained.

The early years of WordPress were largely marked by competition with other open source CMS systems (generally PHP based) such as Drupal and Joomla, but recent years have seen a significant shift in the nature of competition.

Fully hosted solutions such as Shopify, Wix, Weebly and Squarespace all started with the advantages of a lack of legacy concerns and significant financial backing – and all have each made significant strides in their respective markets.

On the publishing side of the equation, new entrants such as Medium and – to a much lesser extent – Ghost are also applying pressure, while existing platforms such as Facebook and Tumblr compete strongly for the attention of potential WordPress users. In short, it’s an increasingly crowded field of companies going after very similar types of users in many respects.

The question for the next five years will be: Can WordPress retain its existing user base in the face of stiff competition while expanding into hitherto largely untapped areas such as the Enterprise space and e-commerce?

A survey of the current top 250 websites seems like an excellent place to start.

The Top 250 Sites Broken Down

The approach we took was examining the top 250 global sites as reported by Alexa in July 2015 with a view to seeing how many relied primarily on WordPress. We’re talking here about the core sites being completely powered by WordPress, rather than it merely being used on the occasional blog hosted in an obscure part of their network.

The first thing we noticed was that WordPress clearly has a lot of room to grow when it comes to truly cracking the global website elite. Out of the top 100 sites, a grand total of one is powered by WordPress: WordPress.com, at number 39.

The position of WordPress.com is an impressive achievement in itself, of course, but it does highlight the relative lack of truly enormous standalone implementations of the platform.

One interesting point to note from the top 100 is the amount of non-English language targeted sites – roughly 40% of the list – proof of the need for WordPress to stay focused on localization and internationalization down the line. Perhaps surprisingly, out of the entire 250 top sites, the only other fully WordPress site to be found is WordPress.org, which clocks in at number 214.

There were, however, four further sites we found that use WordPress to deliver a significant part of their content, and all of them are in the publishing space. Let’s run through them. 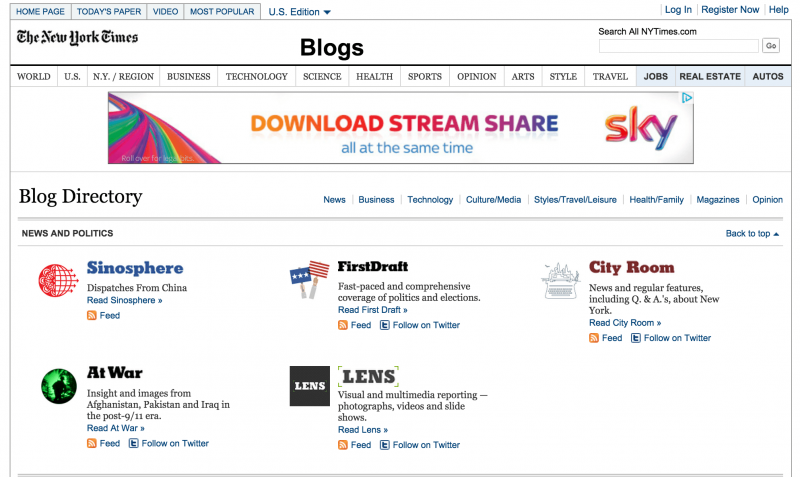 The New York Times is number 111 on the Alexa list and featured prominently on WordPress.org showcase pages, but WordPress is used primarily to power the site’s blog content rather than the overall site itself.

This is an impressive endorsement in itself, though some have suggested that WordPress could handle the entire site. It seems more likely that it will continue to be used as part of the overall toolchain, as recently outlined by Times’ tech folks in a behind the scenes look at their setup.

Forbes.com clocks in at number 158 on the Alexa list but, like the New York Times, relies on WordPress primarily to deal with aspects of its blog content. The extent of their current reliance on the platform is unclear.

They appear to be running their own CMS system Falcon to power the majority of their site which may or may not, in addition to leveraging MongoDB, also be using aspects of WordPress under the hood for article entry.

Developer Yuri Victor gave an excellent presentation outlining how the Post used WordPress to handle much of its blog content back in 2013. Since then, the team at the Washington Post seem to have largely moved on to rolling their own solution. 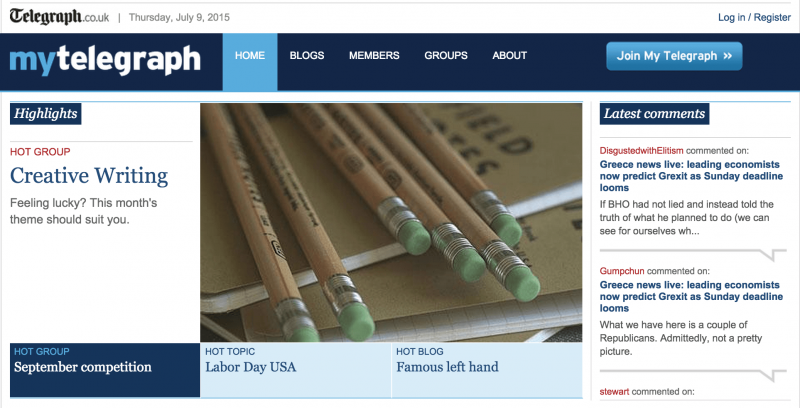 The Daily Telegraph is one of the UK’s leading daily newspapers and comes in at number 234 on the Alexa Top 250, as well as featuring on the WordPress.org showcase.

The story here is a familiar one. Rather than WordPress powering the entire website, it is used to deliver one key part: In this case, a BuddyPress-powered social networking component of the main site called MyTelegraph.

We’re so used to hearing how WordPress dominates the online landscape that the almost complete lack of pure WordPress sites in the global 250 comes as something of a shock. The positioning of WordPress.com and WordPress.org does, however, show the power of the platform – no other CMS appears on the list in this way.

Outside of that it is slim pickings, with just a handful of (admittedly top tier) publishing sites using WordPress to power blogs.

We're curious to hear your thoughts on the results of our survey. Do you think WordPress has a chance of cracking this end of the market? If not, why not? And if you think it's poised to make the leap, what do you think it will take to get there? Share your thoughts in the comments section below.