70% of People Have Never Heard of WordPress

The title says it all. In a recent survey conducted by WPMU, 70% of more than 1,500 respondents from the general population in the U.S. said they had never heard of WordPress. Of course that means 30% had.

For ease of understanding, we’ll report all our stats below in terms of people who HAVE heard of WordPress.

Our question was simple, “Have you heard of WordPress?”

The survey was conducted through Google Consumer Surveys, which claims statistically significant and valid results when at least 1,500 responses are recorded. We recorded 1,517.

Note: The question did not draw a distinction between WordPress.com and the open source software hosted at WordPress.org.

As you might expect, more young people knew of WordPress compared to older people, but the breakdowns might surprise you a little. Age is relative, and therefore so is the term “young.” 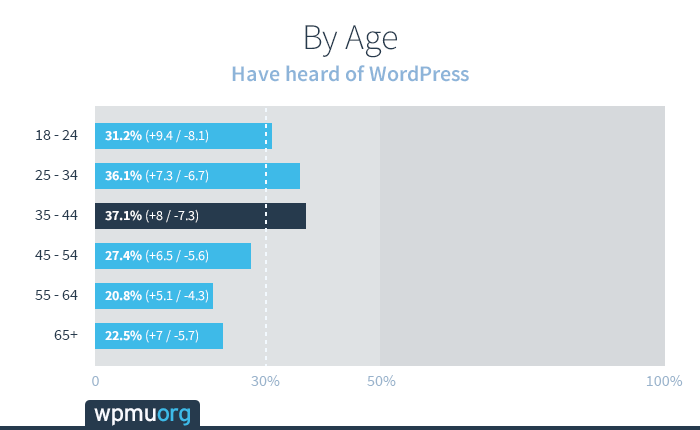 (Note: This survey was conducted on the Internet, and so that may have influenced the outcome of some of these percentages, especially with older respondents.)

So what can we gather from this? Well, if you’re looking for people who are already at least somewhat familiar with WordPress, the sweetest spot of all was the 35-44 group – maybe a little older than some might guess. But the 25-34 group was just a tick behind. And so if you put those two groups together (25-44), you get a nice large juicy pot of 36.6% having heard of WordPress.

When we break it down into both gender and age, the group of females with the largest percentage was the 35-44 group with 37.9%. The next closest group for females was the 25-34 group with 34.7%. 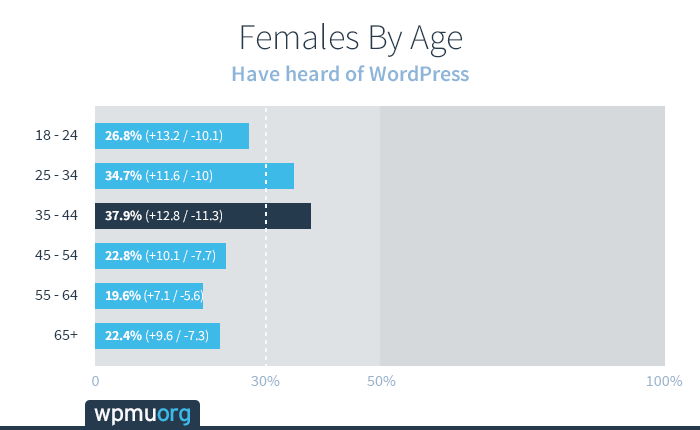 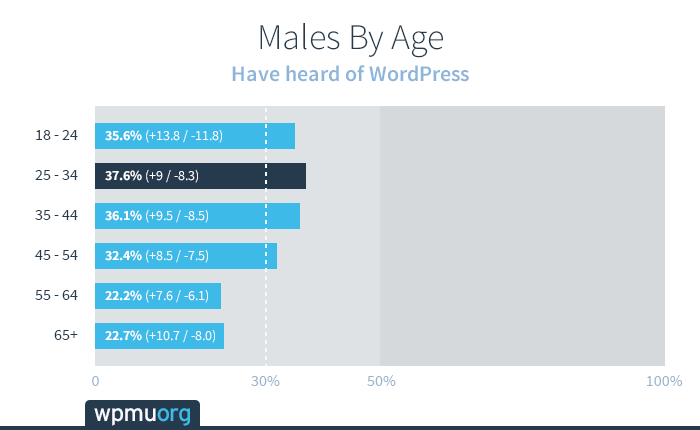 *Note: The more characteristics that are combined, the less statistically accurate the percentages become. For example, the 70/30 split for the entire population has a margin of error of about 3%. When you look at the difference between men and women, the margin of error goes up to about 4%. When you look at gender and age combined (as above), the margin goes up to about 9-13%, depending on what pairings you’re talking about.

For income levels, the distribution was relatively even. Though the $100-149K group below would appear to have a clear lead at 47.6%, its margin of error was very high (+21.5 / -20.7). In other words, the real number could be as low as in the 20s. But as well, it could also be as high as in the 60s. The low number of respondents in this group is what makes the data so volatile.

Because some had a rather high error of margin, we also list the margin (+/-) beside the percentages. 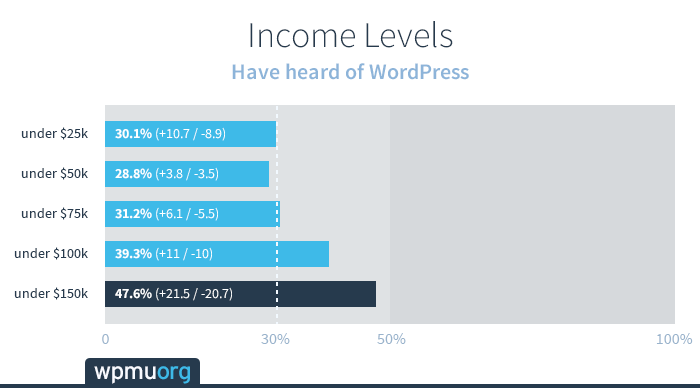 As this survey was limited to respondents in the U.S., the regional data here applies to the U.S. as well, of course.

And so that’s it. Interesting stuff. Anything surprise you … even a little?