Crowdsource Your Blogging Mistakes with the Edit Huddle Plugin 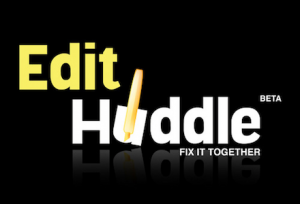 We all make mistakes.

The simple acceptance of that fact is something I love about blogging. It’s okay to make mistakes. Sure – I try to set high standards and don’t like seeing a spelling or grammar mistake slip through the cracks, but it happens. I’m not going to lose sleep over it.

And besides, once you get a big enough audience, people tend to let you know if you have made a glaring error in a blog post. Whilst some bloggers get irritated by this, I see it as free proof reading. How can that be a bad thing?

Whilst receiving corrections on spelling/grammar mistakes and factual inaccuracies on your blog post is a good thing, the way in which they are delivered may not be – especially on large multi-author blogs.

I have personally received friendly notes regarding mistakes on my own blog via comments, email, and Twitter. Although this isn’t much of an issue for me (as I only tend to publish one post per week), I could see it quickly becoming a nightmare for blogs with heftier publishing schedules.

That is a theory shared by Imran Ahmad. He decided that there could be a better way of handling such notes from helpful readers, so he set out to develop a tool to do just that.

The aim of Edit Huddle is to “give your users a direct line of communication to submit corrections and avoid embarassing mistakes with our “Fix It”-button”. Don’t worry – their misspelling of “embarrassing” was deliberate, so that you can test out their tool on their homepage.

In a nutshell, the Edit Huddle plugin allows you to place a little button on your WordPress site’s post pages: 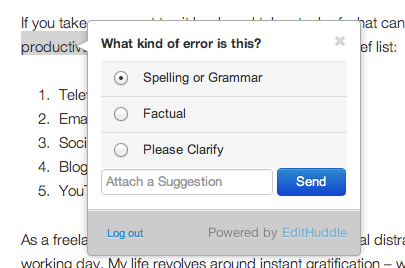 You can login to your Edit Huddle account and review all of the submissions on a per post basis:

The idea is that Edit Huddle offers a centralized hub for all spelling, grammar and factual mistakes contained within your blog posts.

Is It a Good Idea?

I like Edit Huddle. I think it’s a good idea, and there’s no doubting the ambition of the team behind it. But I won’t be using it, and I don’t think that it’s going to take off. My prediction is based upon two assertions:

It’s a catch-22 issue. Edit Huddle would need mass adoption in order to become commonplace, which would give it the recognition it would need in order for people to know what the button does and use it accordingly. But that mass adoption would only come about if the majority of bloggers felt a big enough desire to use it – and I don’t think that they will.

In survey results published on Crowdsourcing.org, a 17% response rate was received from 1,200 bloggers, and 85% of those who responded said that they would the tool, and 40% said that they would pay $1.99 for it. I am astonished by those results, and to be frank, rather suspicious of their accuracy (or if nothing else, the true intent of the surveyed bloggers).

But I would love to be proven wrong and see Edit Huddle succeed, but what about you? Do you like Edit Huddle? Will you use it on your blog? Let us know in the comments section!