Close
WPMU DEV Logo Commons in a Box: A Free, Easy-To-Install Community Based On WordPress and BuddyPress

Commons in a Box: A Free, Easy-To-Install Community Based On WordPress and BuddyPress

The City University of New York has been offering its CUNY Academic Commons since 2009, providing faculty and staff with a way to share insights, ideas and passions with their peers. Since its inception, this platform has grown into a vibrant community of members who use blogs, groups, member profiles, discussion forums and wiki pages to contribute to an active community over 3,000 strong.

Now, the wiz kids behind the inception and development of this project have harnessed its power and released it in a new, extremely well-documented and packaged project, Commons in a Box, aka CBOX.

In their words, here is a brief description and feature set of this ambitious and benevolent project:

CBOX takes the complexity out of creating a Commons site, helping organizations create a space where their members can discuss issues, collaborate on projects, and share their work.

CBOX is based on WordPress and BuddyPress and features the following:

Check out the CBOX demo to see the software in action. 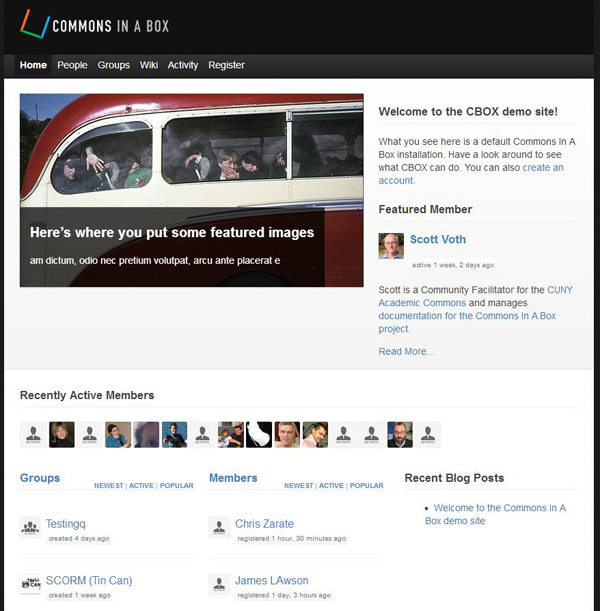 Before you start thinking that this is the ultimate solution for a company that wants its own Facebook, there are a number of differences that make CBOX unique and much more versatile than its Harvard-born predecessor. For example, the wiki capabilities of Commons endorse a more collaborative approach to content than Facebook’s more profile and update-driven approach.

Collaborate With Wikis and Groups

The wikis make collaboration a key element of the CUNY Academic Commons, allowing users to create and share resources across the community. Wikis can be created by anyone but immediately become public, available for editing by any other member. Wikis can only be made private by a system administrator. Site members can then set up a Watchlist of the wikis that they choose to follow and collaborate on.

Users can also create groups, designate them as public or private and have a place to share files, forums, group docs and announcements within the structure of a particular topic or interest in a more personal and directly interactive way.

In this version of CBOX, there is no such thing as a private profile, which means that a user’s profile could potentially show up in a Google search. Instead, the documentation recommends that a user who is concerned about privacy should use an alias, rather than a full name. I suppose that if you’re terribly private and worried about such things, perhaps an online social network isn’t for you. In all fairness, however, they do intend to look into developing this option later on down the road.

The implementation of Commons requires a BuddyPress theme. Admins can roll out CBOX on a current installation of BuddyPress but for those who are starting from scratch, the good CUNY folk even include a CBOX BuddyPress theme for getting started. They’ve teamed up with Marshall Sorenson and Bowe Frankema of PressCrew to offer the Infinity Theming Engine as part of the package.

You’ll find that with the Infinity theme active you will have CBOX-specific theme options to customize for your community: 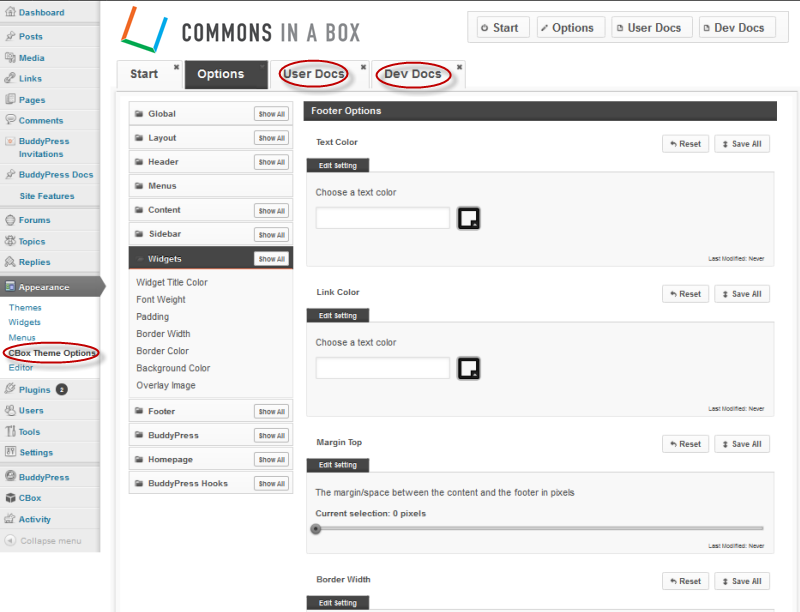 There is also a slew of recommended plugins on the CBOX site, intended to help installers and commons managers get expansive social network functionality at their fingertips. The CBOX folks have preselected the plugins based on their compatibility, both with the CBOX installation and with each other. As new versions of the plugins become available, CBOX will notify admins of the changes and walk them through the upgrade process.

Built using WordPress Multisite, BuddyPress, bbPress and MediaWiki, CBOX is open-source all the way and seeks to promote the same platform that has enabled CUNY faculty to collaborate and build an online community. It will be exciting to watch this project empower other organizations to build a shared space for dynamic collaboration.

Props go out to the authors, designers and developers of this project for releasing an exciting and vibrant project into the wild. Are you excited to install CBOX and try it out for your community? If so, we would love to see how you choose to use it. Send us your feedback and a link to your new community site built with Commons in a Box.