There are some secrets that are worth sharing. Over the past few days I’ve been doing some digging into our stats here at WPMU DEV. Today I was looking specifically at our traffic from Facebook. I noticed this odd and rather drastic change.

It started on 22nd March.

Why, all of a sudden, did our traffic from Facebook suddenly spring to life?

After sending only a couple of hundred hits a month we’re into thousands.

Check out this comparison: 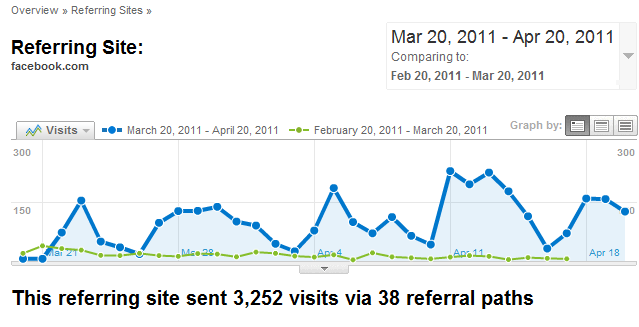 From 20th February to 20th March we received 435 visits from Facebook.

From 20th March to 20th April we received 3252 visits from Facebook.

So what changed? We didn’t see a sudden rise in the people who “Like” us on Facebook. We haven’t changed our regularly posting pattens.

What we did, and what you can do too, was turn off autoposting to Facebook.

We’ve often found that our autoposted links have a tendency to disappear from feeds.

Also, when you are autoposting a large amount of content the posts often get mushed up together with a message that says something like “See 6 more like this”.

Another tip is to phrase your Facebook posts as a question.

This will increase engagement on your Facebook wall. And this can’t be achieved with autoposting.

If you want to increase your traffic from Facebook it’s definitely worth trying out.

It’s also improved out engagement with the community which can only be a good thing.

Have you experimented with increasing Facebook traffic in the past? Share some of your findings with us down below.

Aileen Javier A past writer for WPMU DEV