How to Launch a Crowdfunding Campaign with WordPress

New business ventures are always exciting. You have a unique idea or solution. People seem to be really excited about it. But you need money to get the new business idea off the ground. You could go to investors or the bank to generate capital, but they need to see that there’s real interest in your idea, that people will be willing to pay enough to give you a return on it, and that you’re willing to put in the work to make it happen.

Everyone from the stay-at-home mom to the famous movie star can use crowdfunding campaigns to raise money and support for an idea or cause. It’s also just a really good way to get the word out about and start drumming up enthusiasm around your idea, even while it’s in the early stages.

While there are known platforms like Kickstarter and Indiegogo that can be used, it may be more beneficial for you (or your client) to launch a crowdfunding campaign with WordPress.

Let’s talk about the pros and cons of using WordPress for crowdfunding. If you feel like it is indeed the best option for you, we’ll also explore how to launch a new campaign.

In general, here is how the crowdfunding process works:

What’s nice about crowdfunding is that it isn’t just for someone wanting to launch a new enterprise. There are so many examples of people using it for the purposes of funding passion projects, giving us new gadgets to play with, and raising non-profit donations. 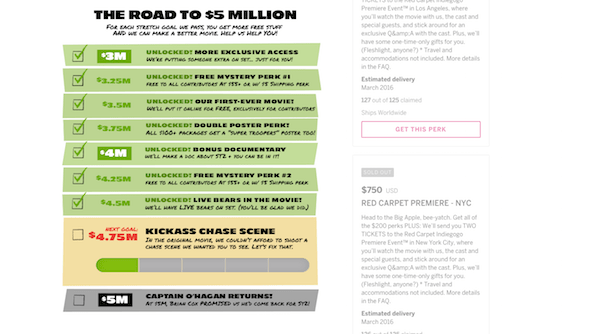 Despite the first Super Troopers cult classic status, the comedy team behind the film struggled to get financing from studios for the sequel. Because a sequel 17 years later was perceived to be a risk in terms of a financial return, the filmmakers were forced to raise $2 million on their own before they could get backing from a production company.

Using Indiegogo to run their crowdfunding campaign, the filmmakers not only hit their goal but doubled it and proved to the studios that fans really wanted a sequel. To incentivize fans and investors to put money towards the campaign, the comedy troupe created different levels of awards, gave away merchandise, and even promised to add certain scenes to the movie based on how much money they raised.

By now, we’re all familiar with what modern-day virtual reality looks like. But back in 2012, the makers of the Oculus Rift headset originally launched a Kickstarter campaign to bring the new technology to life.

Unlike a campaign like Super Troopers, the team behind Oculus Rift created pledges that were more practical in nature since they didn’t have a previous version of the headset to leverage when generating interest in it. Instead, they appealed to gamers and investors wanting to get in on the ground floor of a ground-breaking technology.

A Good Cause: Red Nose Day 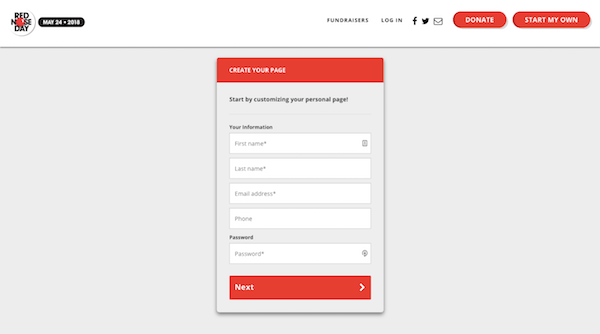 Red Nose Day is a fundraising campaign that donates its earnings to helping children in need around the globe. Since its first campaign in 1988, it has raised over $1 billion in charity funds.

Unlike some other crowdfunding campaigns, this is for a non-profit. The proceeds don’t go to help any organization; instead, they go directly to programs and people that work to end child poverty. The celebrities who participate in Red Nose Day aren’t the only ones working to raise money either.

Anyone interested in raising money for Red Nose Day can do so through the website. The Start a Fundraiser page allows users to build a crowdfunding page on their own or through the Red Nose Day website.

Should You Launch a Crowdfunding Campaign with WordPress?

In the examples above, you get a good sense of how different types of platforms work when you launch a crowdfunding campaign within them. I would suggest that if you or your clients still aren’t sure if your crowdfunding campaign should be self-hosted with WordPress or not, then consider the following benefits:

With a Crowdfunding Platform:

The ease of use and low costs associated with crowdfunding platforms may be alluring for some. However, if you really want full control over your campaign–and you feel as though WordPress gives you the best chance to succeed–then don’t be afraid to build your crowdfunding site from the ground-up.

How to Launch a Crowdfunding Campaign with WordPress

For those of you who have decided that WordPress is the way to go with launching a crowdfunding campaign, let’s talk steps.

When you build a WordPress site for a crowdfunding campaign, you have to take into consideration more than just how it will look. Obviously, you’ll want the WordPress theme to work well for the project. However, you’re not just building a website with a few contact forms for lead generation. You’re building a money-generating machine. Which means your theme needs to be super fast, agile, and secure.

While there are a number of non-profit and fundraising WordPress themes you’ll find out there, I would instead recommend using a high-quality and lightweight theme that’s easy to customize. The themes I’ve found for fundraising tend to be a bit clunkier and have integrations that you might not need or that you have to spend time replacing anyway.

Instead, take a look at WPMU DEV’s picks for the best of the best themes. Here is a list of the best free WordPress themes, if cost is a concern. If it isn’t, then check out these premium themes.

Once you have the basic framework and design of the website sorted out, you need a plugin that will guide you through the process of managing a campaign through your site. There are three WordPress plugins I would suggest:

Once you’ve found the plugin you want to use, install it.

If your crowdfunding plugin doesn’t process payments–or it doesn’t include the payment gateway you want–add your own. Make sure it works when it’s connected to the submission form, too.

Step 4: Install All the Other Plugins You Need

If you want your crowdfunding site to run just as smoothly as the Kickstarters and Indiegogos of the world, then you need to fully optimize it while also only installing plugins you absolutely need.

In terms of performance, these are the plugins you absolutely need:

Security and performance are going to be crucial to this campaign’s success, so do everything you can to get those tightened up once you have your plugins in place.

Because you are actively taking payments from donors and investors from this website, an SSL certificate is essential. Make sure it’s installed before you launch the site.

Unless you’re launching a local-only crowdfunding campaign, you’re probably looking to collect money from investors around the globe. While your optimization plugins will cover you in part, you will need a CDN if you want to ensure there’s no friction or sluggishness when international visitors try to make a donation.

It’s time to solidify your plan on the page. This means:

Publish the pages to the site and arrange them within your navigation in a way that makes the most sense. If your idea, product, or business is brand new, then the About page should be prioritized as potential investors will want to be educated on what you’re looking to do and what their money will be used for. If you already have a well-established identity, the crowdfunding page can go front and center.

With your WordPress site published on the web, it’s time to actively promote the crowdfunding campaign everywhere you can. Notify people who’ve already subscribed to your newsletter, promote the website on social media, go talk about it on podcasts, get major news outlets to cover it, and so on. Then pay close attention to the activity happening on your website to make sure everything goes as smoothly as planned.

There are many reasons why you might need to raise funds, be it to launch a new business venture, get a product idea out of the visionary stage and into production, or raise funds for a good cause. Although you could use a platform like Kickstarter to do this, WordPress allows you to have much more control over the campaign’s image, process, and ultimate success.

Over to you: Do you have any experience using a crowdfunding platform to raise money? What was it like?

Brenda Barron Brenda Barron is a freelance writer from Southern California. She specializes in WordPress, tech, business and founded WP Theme Roundups. When not writing all the things, she's spending time with her family.