1) Where did you get the idea for WP Paintbrush?

Ryan: I originally made a theme generator for WordPress a couple of years ago. It was very well received, but failed in some critical areas, in particular it was difficult to use and was not compatible with WordPress Multisite.

Dan: I saw this a couple of years ago and was quite fascinated by it.

At some point between then and now I helped build my Dad a digital directory board solution for an office building using these same techniques – it was a fun little project and it ended up being made into a product that allows building owners and property managers to easily update their directory boards using a bluetooth keyboard and mouse.

I showed Ryan and a few other people at WordCamp NZ 2009 and I think it planted a seed. Ryan was also working on the Template Editor and so there was an obvious synergy :))

2) Why do you think there is a need for a WordPress theme creator?

I thought it was a no brainer really :)

3) What differentiates WP Paintbrush from other theme creators?

Ryan: WP Paintbrush allows the user to edit their site design via a frontend editor. It is also designed from the ground up to be ideal for use on WordPress Multisite setups. Many other theme creators can not be used with multisite setups due to security issues.

Dan: This is more of a Ryan question in terms of functionality.

I’m only aware of one other true Theme Creator and when I looked at their one (albeit briefly) I thought that we both have our own pro’s and con’s. Of course the Paint Brush has the benefit of being backed by Instinct who back the GetShopped project, we have a very intimate understanding of the WordPress world, and our vision is a long term one that embraces a freemium model that we are also quite intimate with.

4) How does WP Paintbrush work? 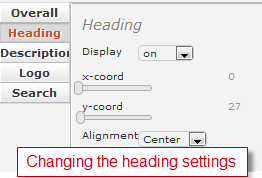 Ryan: The theme can be installed just like any other. When visiting the frontend of the website, an editor interface can be used to modify the design and layout of the website. We have aimed to provide as much control as possible whilst still keeping it simple to use.

Dan: It is an HTML5 Drag and Drop Front End editor.

Users essentially have pullies and triggers that they can use (with their mouse) to manipulate visually the way their site looks without having to muck around with any code.

Ryan: Owners of WordPress multisite networks, site owners who do not know how to create their own WordPress themes and designers/developers who want to reduce new site designs quickly and efficiently.

6) You’ve included the eval() function – just what is it up to in there?

Ryan: Good question! This ties in with the “Paintbrush Template Editor” plugin which allow users of WordPress Multisite to have complete control over their templates without worrying about the security concerns normally inherent in allowing untrusted users to edit WordPress themes. The theme stores the templates in a simple/secure templating language then parses them as PHP which is executed via eval(). This isn’t necessary for single site installs per se, but is extremely useful for multisite setups where traditionally end users are not able to edit their own template files. We have a few other tricks up our sleeve which make use of that functionality, but will be announcing those closer to the time!

There is some information about the upcoming Template Editor plugin available on our plugins page.

7) I noticed you’re launching some plugins to extend WP Paintbrush – Fonts, Exporter and Template Editor – how else are you going to extend it in the future?

Ryan: Hopefully the community will help with this aspect. We have a few ideas for plugins we intend to make, but will be waiting till those ideas are further progressed before announcing anything.

One addition we intend to add to the default setup is a “simple mode“, so that users can make wide reaching changes such as modifying all heading colours, fonts etc. via a simplified interface. This should make it easier to make huge changes to site designs very quickly. With the current setup you need to go through and edit each section individually, which although much faster and easier than traditional methods can be made even easier yet.

And we’re open source the heck out of it. And of course we’re open to ideas!!

8) How does your business model work? Will your be charging for WP Paintbrush? How much?

Dan: Kicking off for free. We’ll look at premium modules and upselling features at a later date once we’re sure the core product is rock solid. Of course if there are any investors out there reading this that want to invest in us we’re all ears ;))

9) When Dan posted about WP Paintbrush on Twitter he said it would be a “game changer.” How’s it going to change the game?

Ryan: Interesting question. We soft launched yesterday with our beta, but haven’t worked out exactly when the release candidates and gold version will be available. Watch this space! There are still some bugs we need to work out and we would like to get our initial plugins fully functional before then.

Thanks to Ryan and Dan for the interview – I’m looking forward to seeing where you go with this one in the future!