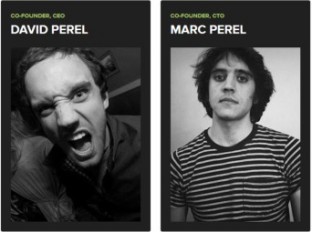 Started in Cape Town, South Africa by brothers David and Marc Perel in 2005, Obox was originally a web development agency that did completely custom sites using ColdFusion. It wasn’t till 2009 that they made the switch over to becoming premium WordPress theme shop.

David, the older of the two by a year, focuses on design, while Marc focuses on programming.

Two themes (1 theme + 1 bonus theme). Lifetime support and updates. Can be used on as many domains as you like.

Three themes. Lifetime support and updates. Can be used on as many domains as you like. Photoshop files. Obox Mobile plugin.

All themes. Support and updates for the duration of your membership. Unlimited use. Photoshop files. Obox Mobile plugin. 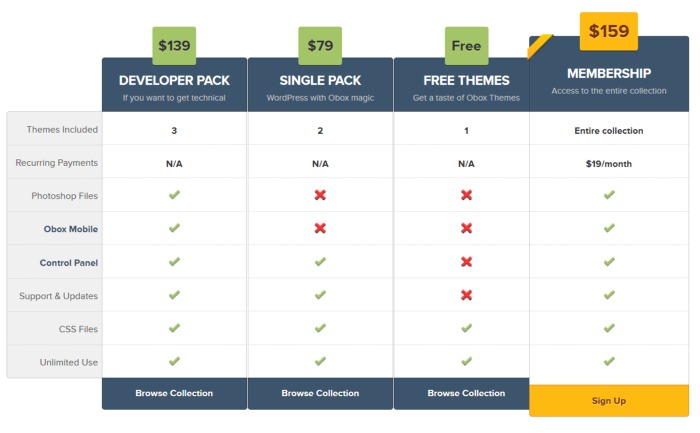 While they currently only have 12 responsive themes (the only type I really consider these days), they do manage to cover a range of different themes in the dozen offering. They include the following types: ecommerce (a number say they integrate with WooCommerce), business, blogging, photography, portfolio, and video.

They also have one theme called Ambition that bills itself as a “talent theme.” I have to admit, that was the first time I’d ever heard that label. Essentially, it’s a theme for self-promotion.

If you’re a band or an artist or speaker or what-have-you, and you participate in a number of different activities such as events, concerts, speeches, etc., and you’re in an industry where you might win awards or gain some kind of official recognition, etc., then this theme aims to highlight those types of things.

For example, on the very long homepage, among some more common elements such as galleries and latest news sections, there’s an “achievements” section … 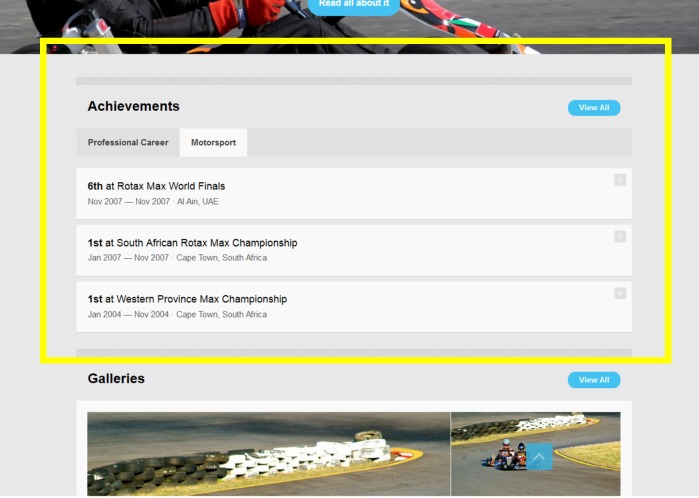 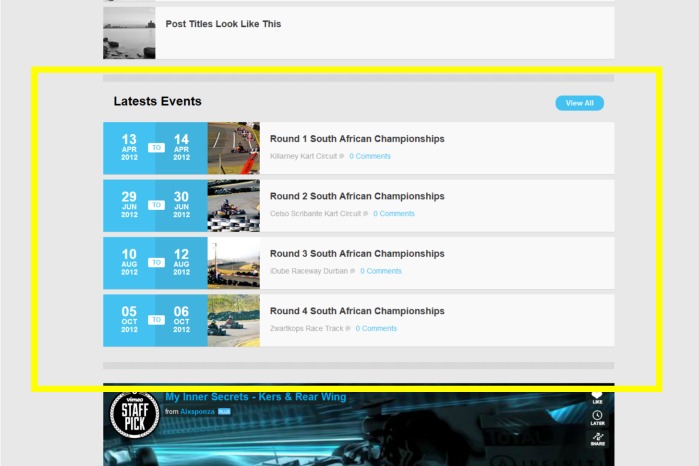 A “testimonials section,” and even a “sponsors” section … 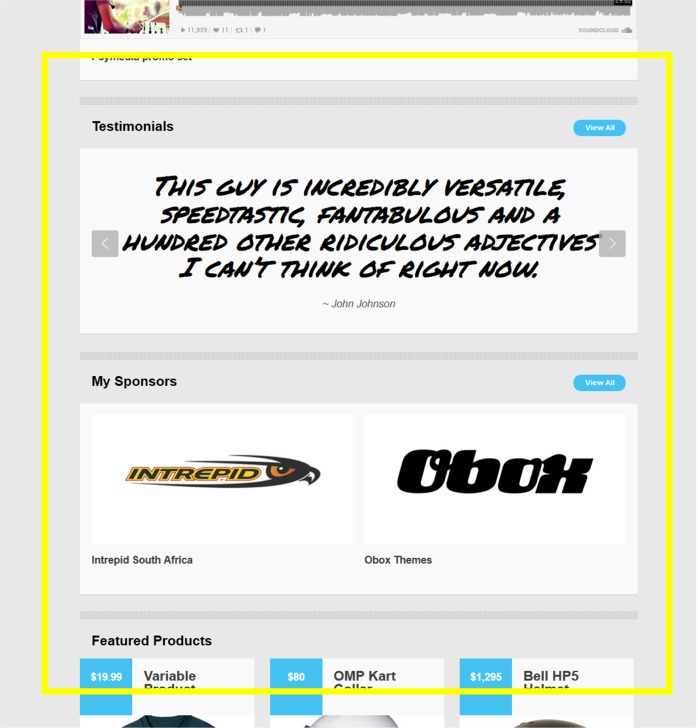 Inside the Admin Section

Though Obox themes don’t go so far as to offer drag-and-drop type control, they do give you a lot of options. We’ll run through a few below.

Features include options such as different layouts. 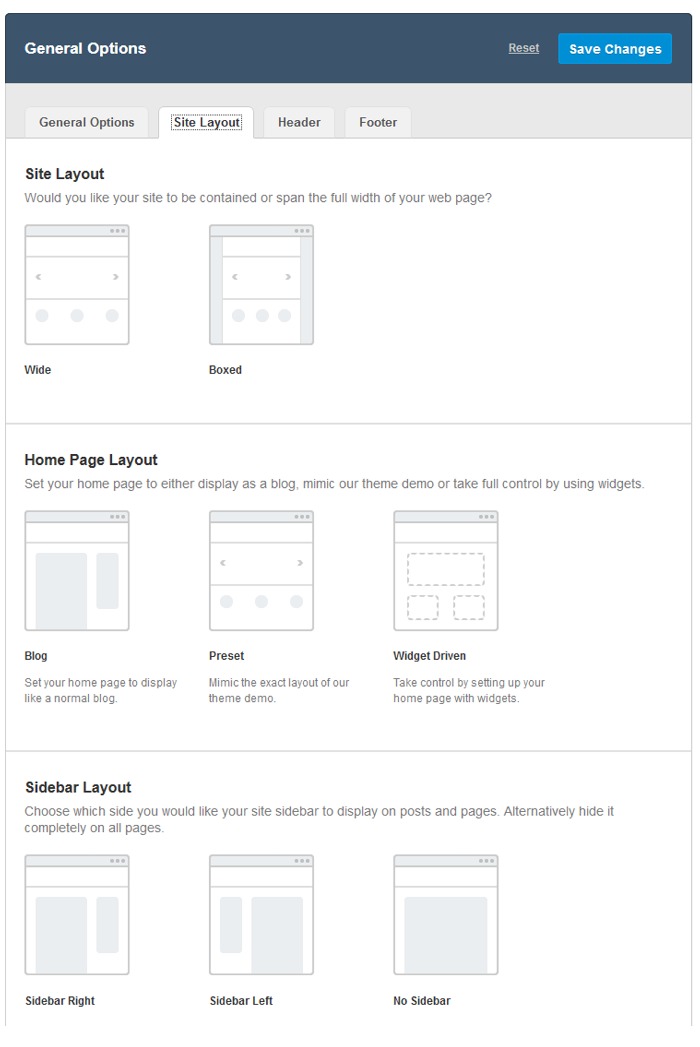 You can also easily control the fonts and the size of your font in your theme. 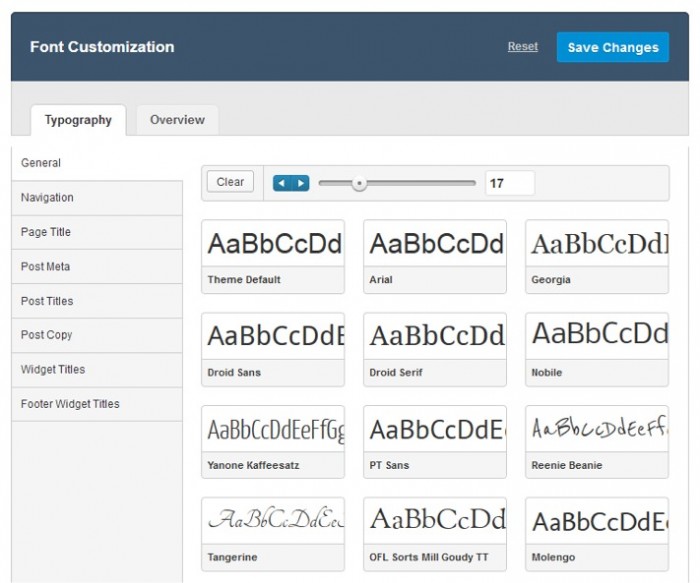 There’s also a very detailed color customizer option that lets you control the color of different elements all over the site – everything from the hover color of links in your header menu to the background color of reply comments. 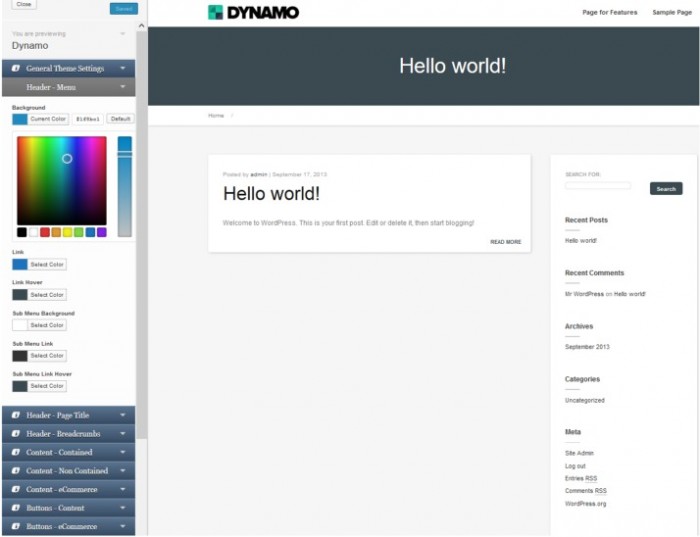 On the whole, Obox themes look a lot like a number of themes from other established developers. However, there are a few exceptions here and there, like the Ambition theme mentioned above, with its prominent placement of features you don’t usually see on a homepage.

There are also a few little things here and there that make you stop and think that a little extra thought and effort has gone into this. One such thing, for example, you can see in the Services section of the Knead theme.

The different mini-sections of that larger section seem to push up from the bottom when the links on the left are clicked. Then they push down again if you go in the opposite direction.

But those little things change from theme to theme.

Take a look, for example, at the effect you get one the homepage of the Retail Therapy theme as you begin scrolling down the screen. You’ll notice a slight fading away of the top image area right before it’s gone. It’s almost imperceptible, but not quite. In other words, it IS perceptible. You notice *something* the first time you do it, even if you aren’t quite sure exactly what it is.

It’s a small thing, to be sure, but it adds that little extra touch – a touch that says, “This theme is slightly more sophisticated than you might have originally thought.”

While these occasional small things may not necessarily be a deciding factor in whether to buy or not, it’s nice to have them.

A Look at a Few Themes

Let’s take a quick look at a few other themes. 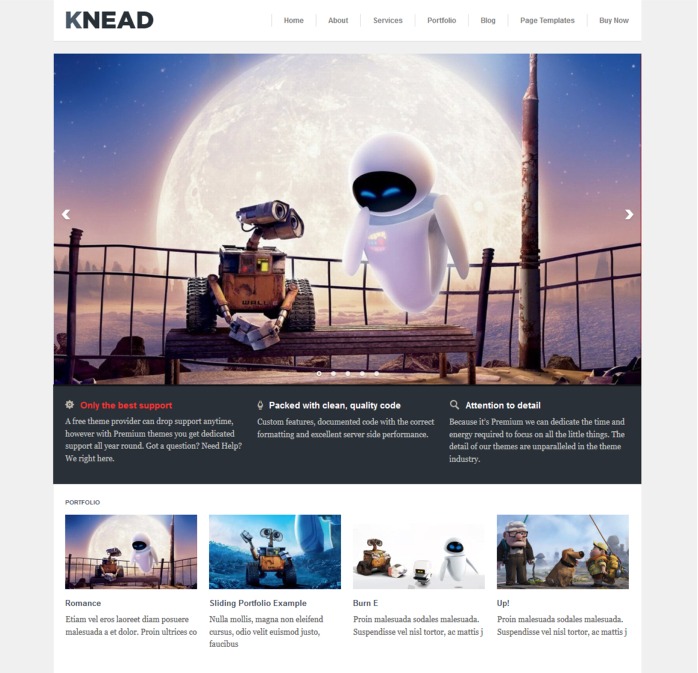 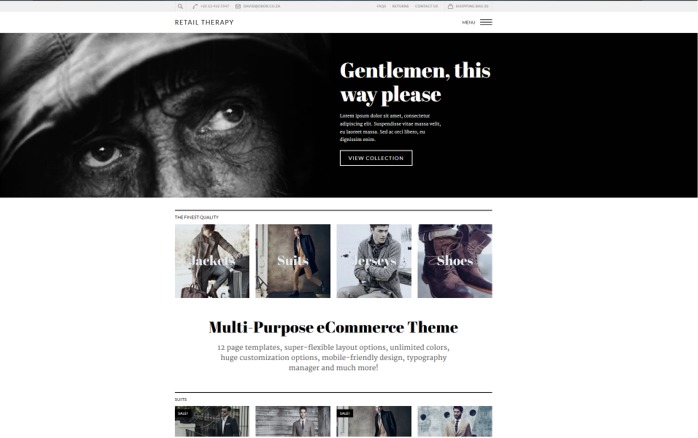 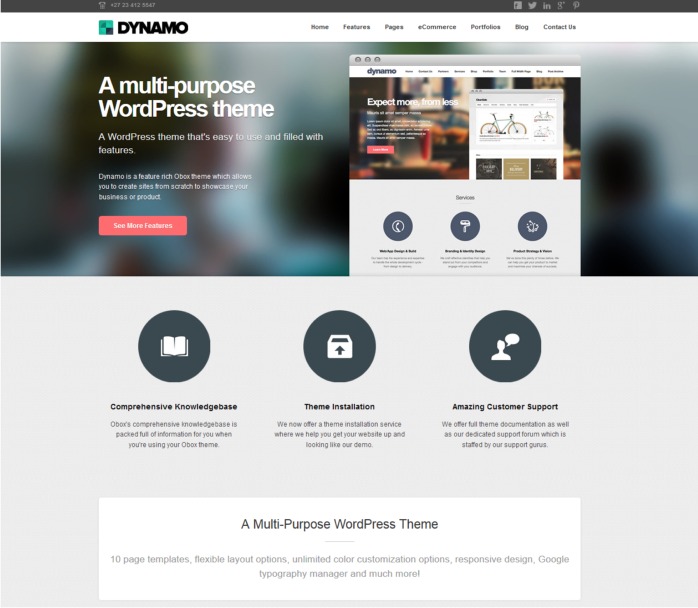 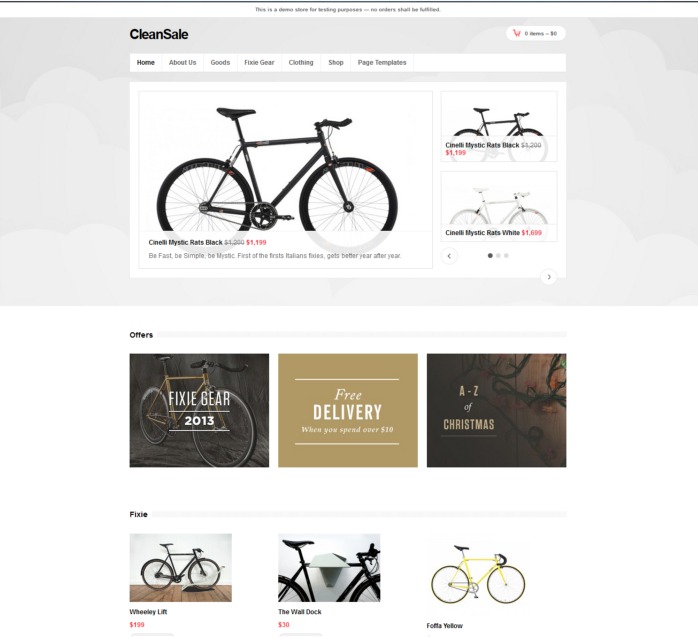 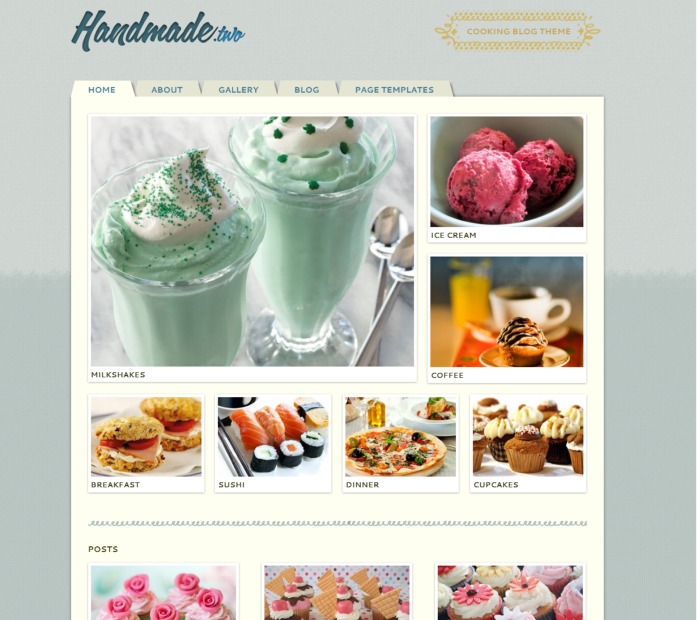 There’s a lot going on with Obox themes.

Having options is good, but the number of options available with Obox themes may get a little confusing for the average user. If you’re a developer, that’s one thing. In the beginning you may still run into some confusion figuring out all the options and deciphering how to get Image X to go into Spot Y, but eventually you’ll get it.

But if you have thoughts of turning a non-techie client loose in such a system, then think again.

For example, you have something called “Features.” And then you have “Sliders.” But Sliders are not Features, of course, because Features are Features. But Sliders, as you might imagine, can and do usually go at the top of the homepage in a spot that’s typically reserved for content we might normally call “featured.”

But you can also put a Feature in the spot on the homepage where the Slider normally shows up but only if you go to the Site Layout section in the Theme Options and choose the Widget Driven layout and then go to the widgets section and put the Features Widget in the Home Page area – but you need to make sure you leave the Slider area empty … of course.

OK, written out in text like that is a little unfair. It’s not that it’s impossibly complex in the end. It’s just that there are a lot of different options to consider. And you’ll need to learn their system, which doesn’t seem overly intuitive at times. I’m just saying that I’ve come across easier systems to manage.

In the end, I’d rather have the options, even if it means more complexity. Some would prefer more simplicity. And I can definitely appreciate that. And no doubt your clients can too.

Support is through documentation and a support forum. The forum is broken down by theme, and so that makes it easy to find answers to your issues.

Response times to questions were fine. Questions asked in the evening U.S. time seem to mostly be answered by the next morning (U.S. time).

A look through the forums shows moderator intervention (and answers) on question after question. No leaving people hanging, which is always a good sign.

In order to check the speed, we used Google’s PageSpeed Insights tool. Google says that a score above 85 is very good. Many themes don’t really come close to this, although a few do. A very few even manage to surpass the 85 mark — at least on the desktop portion.

I tested two demo sites from the Obox site – Dynamo and Retail Therapy.

Below is the speed for the Dynamo theme. 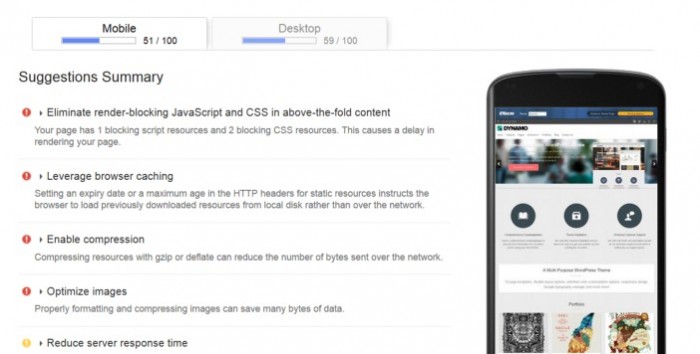 While not many themes edge up to the 85 number, that result above was fairly low. As the Google speed test might be measuring some things that aren’t really associated with the theme, I decided to repeat the test on my own (mostly blank) test site. That was a little better, but again, my site was mostly empty. 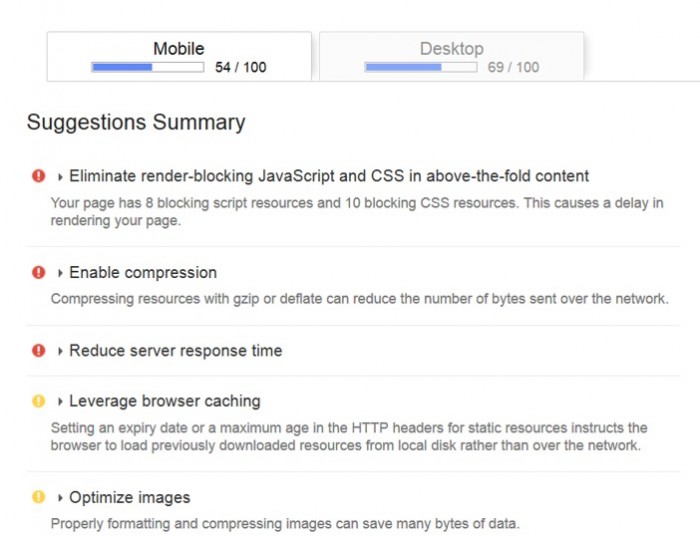 Next I tested the Retail Therapy theme. Unfortunately, those scores were even lower. 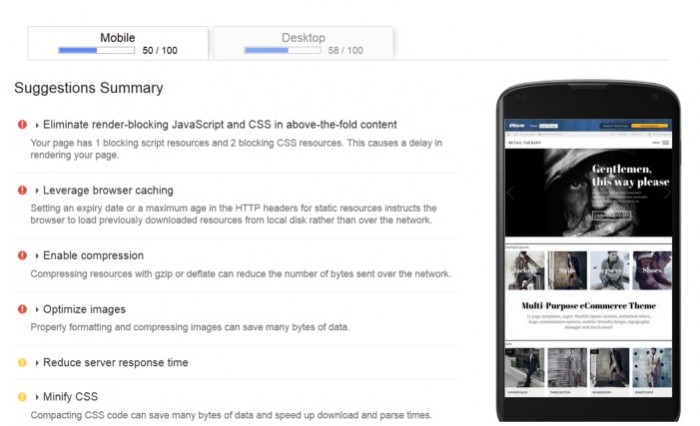