When choosing an open source CMS for the backbone of a new social network, WordPress and Drupal offer two solid options. While both platforms offer numerous options for adding social networking aspects to your website, the packages available in BuddyPress and Drupal Commons are some of the most polished. We’re going to take a look at both and offer a heads up comparison based on four major factors:

Your experience will largely depend on which platform you are most comfortable building and working with on a day-to-day basis. However, if you’re open to either, here are a few things to consider.

Ease of Installation and Setup

I’d have to rank both BuddyPress and Drupal Commons equally on ease of installation.

The process for BuddyPress involves setting up an installation of WordPress, which can be done in 5 minutes or less and then installing the BuddyPress plugin. All in all, you can be up and going in under ten minutes.

Drupal Commons comes as a complete package, ready to install. It bypasses the process of downloading and configuring all of the modules needed for building a social network with Drupal. During the installation process, simply select the Drupal Commons installation profile. You’ll be up and going in under ten minutes with this platform as well. 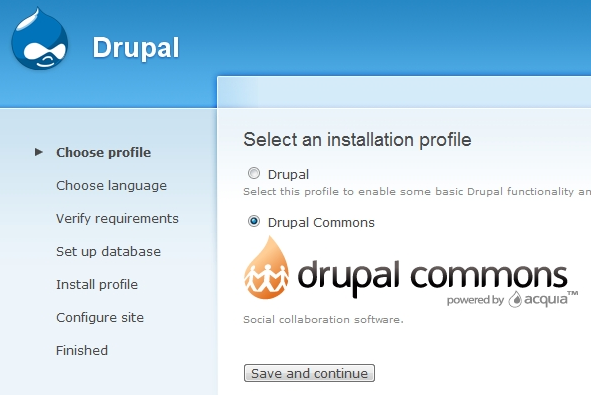 If you’re looking for the most features in one package, then Drupal Commons is hands down the winner. Not only does it have more features but each feature has a greater level of built-in functionality and control than the basic BuddyPress components.

BuddyPress assumes that site administrators will add functionality through plugins as needed. Drupal Commons builds in features that can be turned on or off.

The ‘groups’ functionality is a perfect example. BuddyPress includes a Group Extension API so that you can extend groups with your own custom features. Drupal Commons groups include built-in events management, blogging, polls, discussions, documents, a wiki, invite a friend, and powerful management controls. Not all sites require this level of functionality. However, if you want this with BuddyPress, you will need to install many different plugins, each of which may or may not be maintained and/or updated.

After close inspection and several hours of testing, I’d summarize BuddyPress as a social networking framework where you get only the basics. Additional features and controls are available through plugins. I believe this is intentional so that the core of BuddyPress stays lean for those who don’t require much more than friending, messaging, wall posts, and groups. Drupal Commons would be the option you’d want to select for a full-featured social network with many more forms of interaction already built into the platform.

The default design that each social networking platform ships with is very important because it contains the basic framework that you’ll be customizing. It determines how much work will be involved in shifting the templates around to match what you envision for your community, if you’re theming your site from scratch.

The default BuddyPress theme is somewhat more rounded, has a tab style navigation, and makes use of AJAX. Customization is done through the creation of child themes as well as adding and manipulating widgets.

The default Drupal Commons theme is a bit more bare-boned than the BuddyPress theme. It’s mostly lines and squares and lends itself well to customizing and rearranging. For example, as the site administrator, you can easily move blocks of site content around, similar to the way WordPress widgets work. However, the Drupal blocks are also visually customizable – you can set the alignment, height, text style, menu and image styles, all without having to edit any CSS.

When it comes to interface and design, I’d say that Drupal Commons is the clear winner for ease of customization through the backend dashboard as well as handling the basic default theme.

Drupal Commons is an open source project, maintained and supported by Acquia. They also provide Commons as a fully managed and/or hosted service and offer several commercial roll-out packages. If you choose to host and manage a Drupal Commons site yourself, you will probably have the Drupal forums as your main place for support. Because Acquia provides commercial products and services related to Drupal Commons, you’re going to find that it’s a fairly polished product right out of the box. If you need to extend Drupal Commons to do something more than what it does, there are over 7,000 Drupal modules available to you, as well as a highly flexible API if you want to write your own customizations.

The BuddyPress project is still a somewhat uncharted frontier. Its code base and documentation are continually improving, although it’s at a somewhat slower pace. The BuddyPress community is comprised of a large number of volunteers and dedicated plugin developers. A great deal of support happens in the buddypress.org forums, but it’s not guaranteed. BuddyPress has nearly 300 BuddyPress-specific plugins currently available for quickly extending the platform, and you can also take advantage of over 13,000 plugins in the WordPress repository.

The support and community environment that you prefer depends on what type of user you are. If you enjoy creating your own extensions and don’t need a lot of help or documentation, then BuddyPress may be suitable for you. If you prefer having a large commercial venture create and maintain the code and want the option of getting support directly from them, then Drupal Commons may be a good choice for you. Both projects are open source and you will be limited only by your own abilities and resources.

If you have experience with either or both of these platforms, we welcome your personal review in the comments.