Any seasoned WordPress plugin developer will tell you that life would be a lot easier if people kept their WordPress installations up to date. But unfortunately, it seems that the vast majority do not. So what is a plugin developer to do – should they spend considerable time making their plugins backwards compatible so that they can maximize their potential user base, or should they be more ruthless? 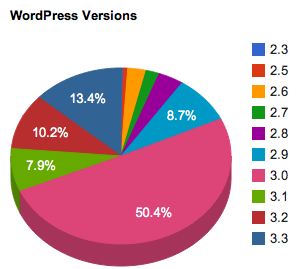 With only that information to hand, any plugin developer would be forgiven for resigning themselves to developing for users running 3.0 and up at the very least. The temptation might even be to work in compatibility for even earlier versions. However, we’re not looking at the whole story.

Fear of Upgrading – Only Temporary?

At this moment, 3.3 has been downloaded over 13 million times – which represents approximately one third of all self-hosted WordPress installs (and contradicts WordPress.org’s version pie chart). But if you care to search for information relating to upgrading WordPress 3.3, you will actually struggle to find anything wholly in favor of upgrading. There are plenty of horror stories out there – compatibility issues, bugs, a decrease in load speed…the list goes on.

However, most of the issues are “teething problems”, resolved in a relatively short space of time. When 3.3 was released, there was no shortage of people saying “I’ll let the developers iron out the kinks and wait for 3.3.1, thank you very much”.

By my rough calculation, WordPress 3.3 is being downloaded approximately 70,000 times every single day. Which means that every 5 days, it gains another percentage point of all active WordPress installs. Based on these numbers alone, version 3.3 is dominant, and continues to grow in popularity. Whilst you might make the point that each download does not represent an actual fresh install or upgrade of WordPress, the numbers still seem pretty compelling.

The fact is, I am willing to bet that the vast majority of “active” WordPress users – those that are relevant to plugin developers – are running 3.1 and up. Whilst WordPress.org shows a sizable proportion of websites running 2.x or 3.0, you have to question whether or not such sites are of any existing worth. Are they still being maintained? If they are, are the owners actively seeking out new plugins? It seems a fair argument that if a WordPress user hasn’t updated in over a year, they have little interest in seeking out new plugins (and if they are, they probably expect to have trouble with them).

Going back to Dev4Press’ article last November, they ran a survey and found that 87% of their readers were running 3.1 and up. Remember – this was before 3.3 was released. I ran a survey on the WPMU DEV Facebook page just a few days ago and discovered that a whopping 93% of participants are running 3.3. 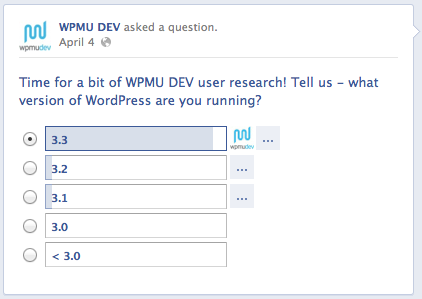 Who Do You Want To Develop Plugins For?

If you want to develop plugins for savvy WordPress users (who are far more likely to spend money on WordPress-related products), then the evidence would point to you only needing to work with the latest WordPress version. You could cast your net wider by working in backwards compatibility, but you should ask yourself how much you will benefit.

From a practical viewpoint, it could be seen as sensible not to upgrade to a major new version of WordPress (like 3.3) immediately. However, I would argue that anyone who has an active and ongoing interest in their website would upgrade sooner rather than later. Because although there is always that fear of an upgrade breaking a plugin or triggering the apocolypse, there is also a healthy fear of not being able to work with new plugins. And in my opinion, that is how it should be.