Prepare Yourself for Infinity: A WordPress Anti-Framework for Extending WordPress, Multisite and BuddyPress

Infinity is a brand new free Anti-Framework developed by BuddyPress afficionados Bowe Frankema and Marshall Sorenson. It’s been a year in the making and it has just been released as a private beta (private including anyone on Twitter who follows them.

You can expect to see quite a bit about Infinity over the coming months as both Sarah and I are both signed up to the beta and will both be seeing just what Infinity can do. Later this week I’ll be posting an interview with the developers, but to whet your appettite let’s check out a few of the things that Infinity can do.

We’ve all heard of a WordPress Framework – in fact it seems like there’s getting to be as many frameworks as there are themes. Infinity is an Anti-Framework. I know, eh? right….

What makes Infinity different is that it sits between WordPress and your theme – any theme. I’ve been testing it out with Twenty Eleven and it’s pretty impressive. It is a layer of tools and features that extend WordPress without comprimising on your current design.

Infinity makes features remarkably easy to add and remove, and you don’t need to be an expert in PHP to do it. So long as you know your way around your template files and can open a text editor you’ll be able to easily extend your theme.

But that’s not all….

Unsurprisingly for two guys who love BuddyPress, Infinity is 100% BuddyPress compatible.  It is also compatible with every 3rd party plugin that works with the BP Default theme (which is all of them, right?).  And that’s not all:

Bowe and Marshall didn’t just want to make Infinity work with Multisite – they wanted to innovate. Network Admins often have a unique set of problems when it comes to providing themes for large networks. Infinity is the Granddaddy of Parent Themes – literally.

You can take Infinity and create an infinite number of child themes. It’s what the developers have called “The Scheme.” 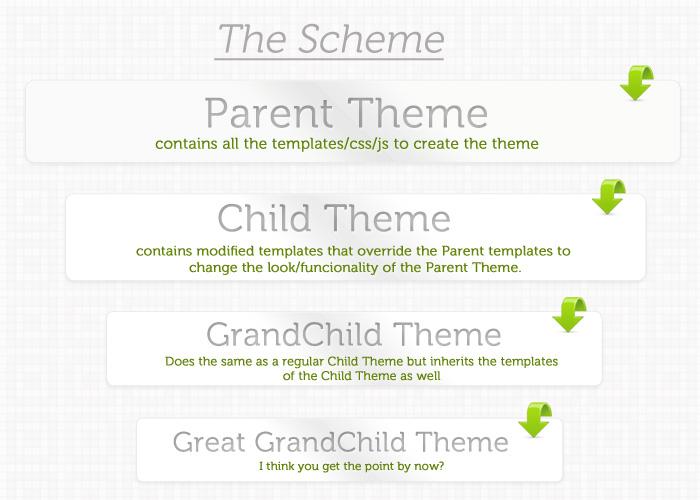 Not only do your templates cascade, but your features, options, widgets, shortcodes, images and stylesheets do as well. This means that you can add an option in Infinity and it will cascade through all of your child themes. Or you can work your way down the scale and add or remove functionality from just one or two branches of the family tree.

As if that wasn’t all, Infinity makes it easy for you to totally customize the dashboard across your entire network.

Phew… that’s a lot of stuff. But it isn’t all. Infinity is definitely one to watch. Keep an eye out for our interview with Bowe and Marshall, the brains behind Infinity, later this week.

Update: If you would like to get in on the private beta visit Presscrew and use the sign up code: The Royal We

(I should also mention that they are Big Lebowski fans! Important information for anyone making a decision about WordPress)