StudioPress was started by Brian Gardner and is now part Copyblogger Media.

According to an interview at Mixergy, before getting into theme designing, Brian was a project manager for an architectural company designing lab spaces for colleges, healthcare facilities, and the like. He eventually started a blog, and then eventually got onto WordPress. Not satisfied with the selection of free themes on the market, he started playing around with his own design.

One thing led to another, and he eventually started taking on clients. One client hired him for a design, which he dutifully completed. The theme, as it turns out, was a little more than the client wanted, and so he turned it down. That theme would eventually become the basis for a precursor to StudioPress, a site (and a theme) called Revolution Theme (RevolutionTheme.com – now redirects to StudioPress.com).

In his first month, he had $10,000 in sales. That quickly doubled. And then doubled again. And it kept on going.

He credits the success of the Revolution theme to the fact that it had featured areas on the homepage when other themes at that time didn’t. In other words, it looked less like a blog and more like a CMS/magazine design.

After changing the license of the Revolution theme to be completely GPL compliant, he started Revolution 2, and it’s that effort that eventually turned into StudioPress.

While a theme at $99.95 is surely expensive, you also get lifetime support and updates. As many theme developers are going to a yearly subscription model, StudioPress’ themes are beginning to look like a better and better deal each day.

It also seems there is a deep discount for returning customers, and so that’s good. 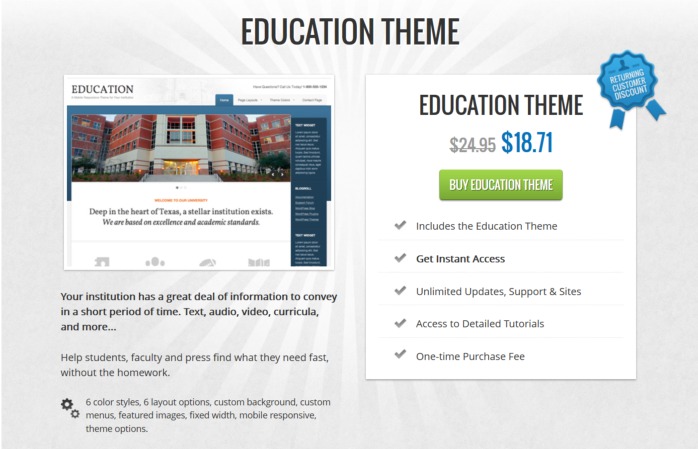 For $349.95, you get all the themes created by StudioPress, including support, updates, and even future themes.

You can also buy the Genesis framework by itself for $59.95.

StudioPress themes, or more correctly, the Genesis framework is said to be both structurally sound and secure. It is also said to be good for SEO. It comes with features such as automatic updates (optional) and easy Google authorship integration.

Many of the controls come in the form of widgets, sometimes very detailed ones. For example, take a look at this widget for featured posts.

While there are no major page-creation tools in the Genesis framework, such as the ability to drag and drop different elements to create a truly unique design, you can change the basic layout of each Post or Page by simply choosing one of the pre-configured layouts.

The different layouts available will depend on the theme you’re using.

On this theme, there are six available layouts.

This theme, however, only offers two.

Here’s a look at the settings page for the framework.

As mentioned before, when you buy into the Genesis framework world, you find that there are others there too. And some of them build plugins.

Many people using Genesis rely on plugins in the WordPress Directory that are specifically built for use with the Genesis framework. A search for “genesis” in the directory brings back 157 results. While all those may not be directly related to Genesis, a lot of them certainly are. Some are merely claiming to be Genesis compatible. Still, it’s good to know there’s a community out there building something specifically for the framework you’re working with. 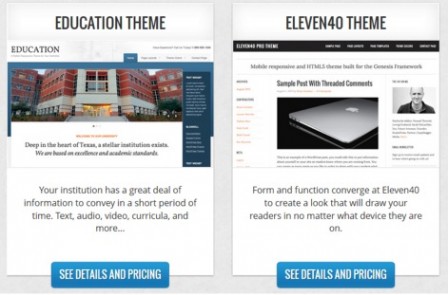 Sober. This is the word that comes to mind when thinking of StudioPress designs. Sober is not a bad thing. Sober can actually be a good thing. It really depends on who you are and what you want.

Do you want a party? If so, then StudioPress may not be the best option for you. You may be thinking you’ve seen all these designs before. Same ol’, same ol’. Etc. etc.

But if you’re looking for a site that communicates stability, then StudioPress may be right up your alley. The small things are done right. No, they don’t grab you by the throat, but they’re not meant to.

StudioPress has 26 repsonsive themes. Those include a number of corporate/business type themes, magazine themes, themes for photography, a theme built specifically for custom post types, and more.

While a number of themes advertise coming in different colors, in many cases a color switch affects only accent colors – things such as links or a small flourish of color here and there. Occasionally the background color will change, but that is something you can likely do on your own anyway.

The default color for headers and header menus seems to black in most cases. And that’s fine. But as mentioned, when changing the color of the theme, that sturdy black presence isn’t what changes (at least on the demos I sampled). There are a few exceptions to that, but they do indeed seem to be exceptions.

For example, here is the “Magazine” theme in blue. 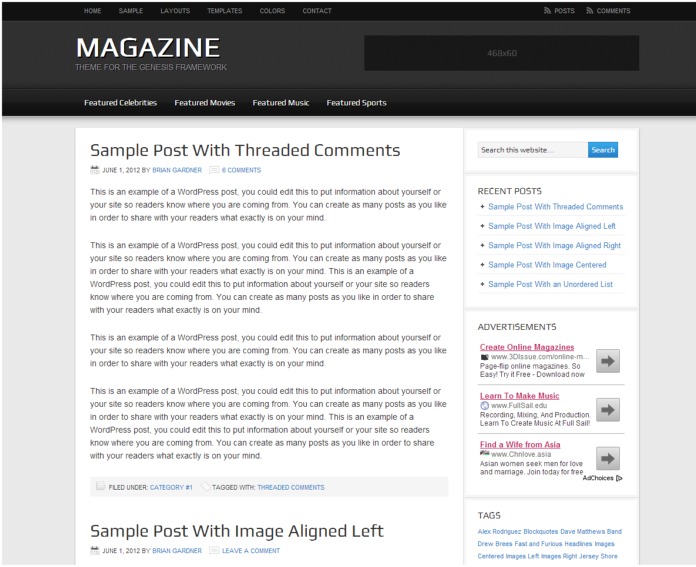 And here it is in orange. 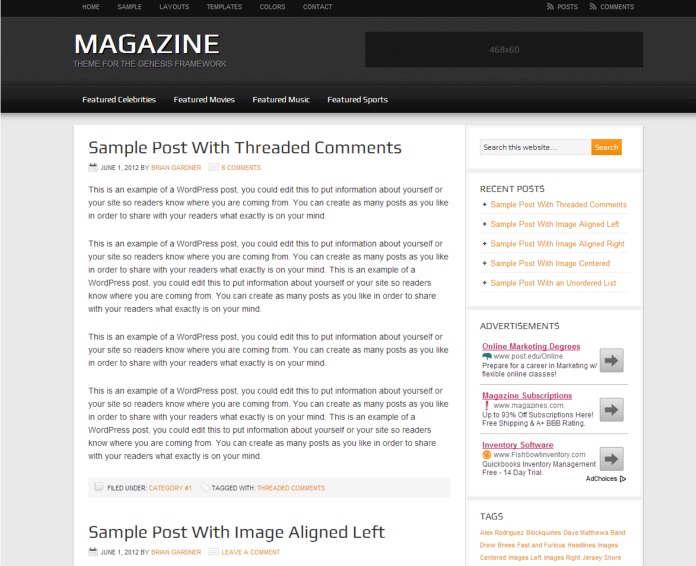 Here’s a look at a few of the themes from the collection. 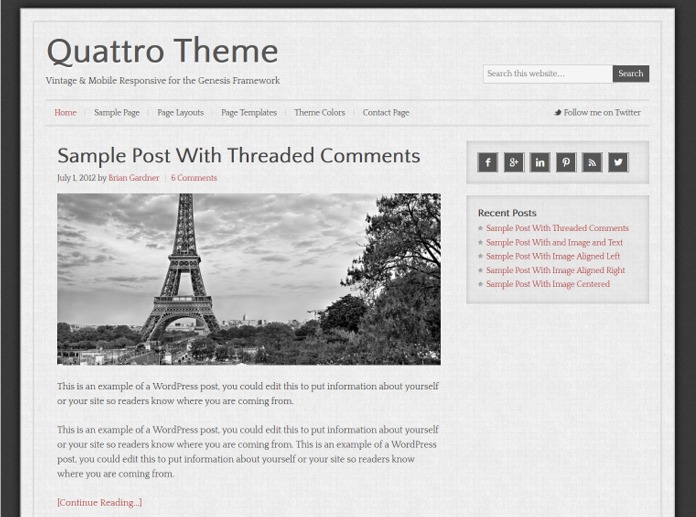 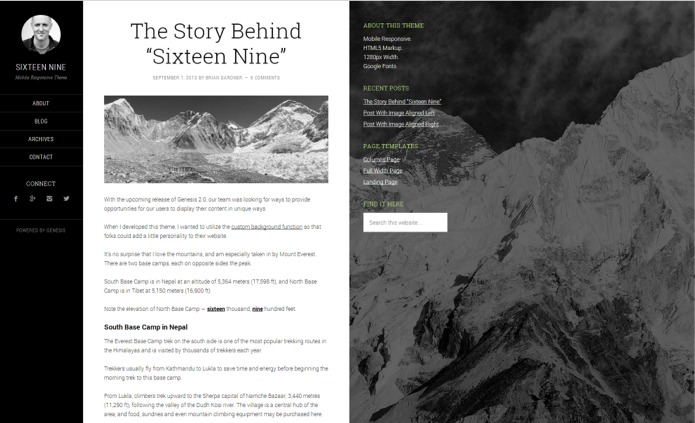 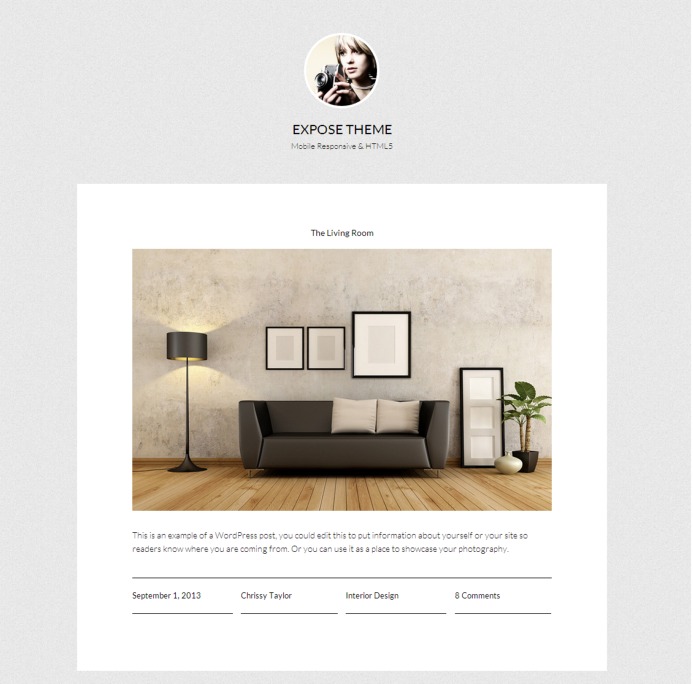 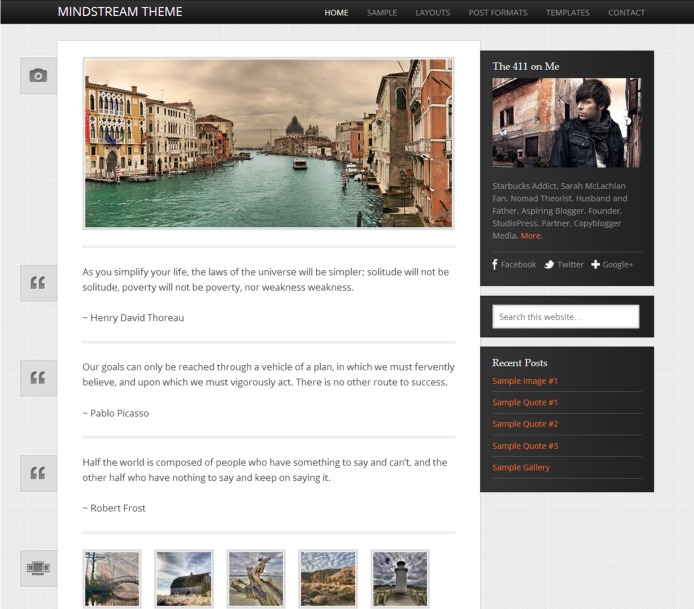 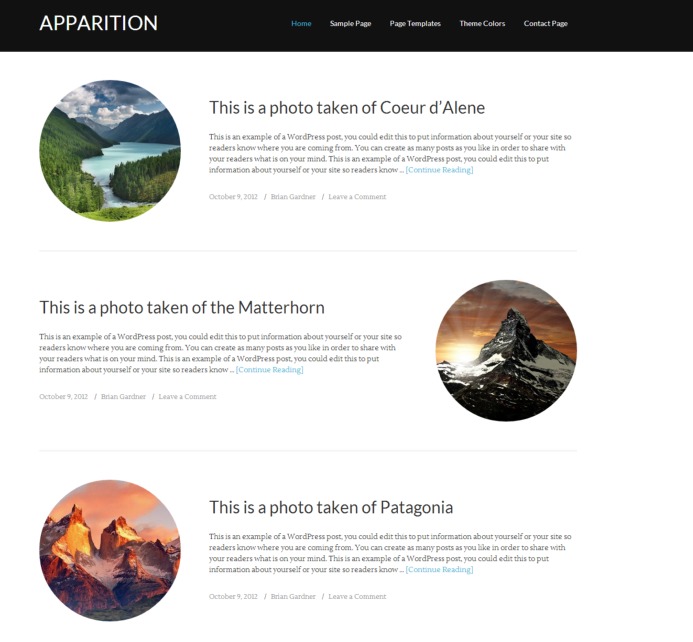 As with plugins, you’ll find that there are a number of Genesis community members that make themes. Some of these themes come with a cost. StudioPress even hosts a marketplace where some of them are sold.

There are also, however, free Genesis child themes out in the wild. These vary from old StudioPress themes that are no longer being updated to fresh themes created by independents.

StudioPress is relatively easy to use. As mentioned, there isn’t much in the settings that should rise above the level of basic these days. And while some of the widgets can be fairly detailed, the options there are also pretty basic – show a title or not, choose a gravatar size, etc.

Support is through email and forums. There is also a fairly detailed tutorial system.

While there is a forum, as mentioned, the link for it is somewhat buried away in a submenu at the top of the page. When you click on “Get Help,” you’re taken to an FAQ. Many of the answers in the FAQ direct you to a tutorial for that question.

Under the FAQ, however, you’re given a contact form for support emails (not a link to the forums). And so it would appear that StudioPress would like you to send an email over going to the forums. At least that’s the impression I received.

And so that’s exactly what I did. I submitted a number of tickets. When submitting a ticket, you’re told to expect up to 24 hours during the week and 48 hours on the weekend or holidays.

I submitted a ticket on a Friday at 1:15 p.m. (U.S. time). This was also a weekend where Monday was to be a holiday. I received and answer back at 2:09 p.m. – so less than a hour later. It’s good to see they weren’t skipping out early on a Friday.

Deciding to put them to the test, I submitted another ticket on that Sunday at 7 p.m. As Monday was a holiday, I expected I might have to wait until Tuesday to get an answer. My answer arrived the next day, however, at 9:45 a.m.

Looking through the support forum, it would appear that StudioPress relies heavily on its community to help each other out. While you do see moderators answering questions, the majority of the questions seem to have no moderator interjection. And that may be fine. If someone else can answer the question, then it’s not needed.

As with the other theme reviews, we used Google’s Page Speed Insights tool to check the themes for speed. These test may not be the be-all and end-all, and some may quibble with them, but at the very least we’re comparing apples to apples.

Google says that a score of more than 85 on its tool is very good. Most themes I’ve tested have never reached that mark, but a few have.

I tested two StudioPress themes on the tool – the Agency theme and the Expose theme. Both were tested from their demo sites.

Here’s the result for the Agency theme.

Here’s the result for the Expose theme.

StudioPress has clean, solid designs that run on top of a clean, solid framework. Relatively conservative in their design approach and basic in functionality, they aren’t for everyone. But if you see a style in one of their themes that appeals to you, you can feel confident that you’re getting a stable system underneath it.

StudioPress also has two other things going for it – an active community and a pricing scheme that (at least for now) allows for lifetime updates and lifetime support. A year ago, that was nothing. These days, it’s quite a deal.