How to Set Up VersionPress for Git-Powered Version Control

One of the best things about WordPress is how easy it is to make sweeping changes to a website in just a few minutes. But with no easy way to revert a website to a previous state, you can lose a lot of work very quickly if you aren’t careful.

VersionPress brings the power of Git to WordPress so you can make as many changes as your want with the knowledge that undoing any change is just a click away.

If you’ve ever created even a simple website from scratch you can better appreciate the power of WordPress. With WordPress, a few clicks is all it takes to completely change the appearance of your site by installing a new theme, new features can be added in an instant by installing a plugin, website users can be managed with ease, and all of this can be done without typing a single line of code.

The only problem is that most actions in WordPress are irreversible. With the exception of page and post revisions, which are tracked pretty well by the WordPress core, if you want to undo any changes you have to recreate them. Even worse, unless you’re a WordPress developer, there’s a good chance that a lot of the changes you make to your site are made to your live site, meaning that if something goes wrong the consequences could be severe.

VersionPress is a project that promises to change all of that. By bringing the power of Git version management to WordPress websites, VersionPress adds an undo button to every single change made to a WordPress website. Make a change you regret and undoing that change is just a button click away.

In essence, VersionPress is designed to be “the Undo button for WordPress”.

And that’s just the tip of the iceberg. VersionPress aims to track every tiny change, even the dismissal of admin notifications, and to make it easy to selectively undo anything. VersionPress is an ambitious undertaking that aims to do nothing less than to bring version control to the masses.

Bringing a Big Idea to Market

In 2012, two web developers, Borek Bernard and Jan Voracek, began to work on a version control system that would allow them to better coordinate their efforts when working on WordPress development projects. At the time, the system was an internal project the two developers used to manage their own projects, and they worked on the idea as time would allow throughout 2012 and 2013.

By the beginning of 2014, enough of the technical foundation has been laid that they were confident that creating a robust, user-friendly, version control system for WordPress was technically possible. However, it wouldn’t be easy. In order to be able to devote the time needed to develop VersionPress, they were going to need some funding.

While the crowdfunding campaign went on to raise a modest sum, the response from the WordPress community was enthusiastic and overwhelmingly supportive. As a result, Jan and Borek decided to move forward with the project despite the fact that their fundraising goal was not met.

Following the completion of the crowdfunding campaign, in the second half of 2014, a few pre-release versions of the plugin were made available to campaign backers. Then in January of 2015, an Early Access Program was announced. This was a paid program open to anyone and conceived as a way to fund ongoing development of the plugin while giving supporters early access to the plugin as it reached development milestones. The first major version of the plugin, VersionPress 1.0, was released to Early Access Program members 3 months later, in April of 2015.

In October of 2015, VersionPress 2.0 was released and a round of seed funding in the amount of $400,000 was announced simultaneously. The following month, VersionPress moved to GitHub in anticipation of a switch from a private to an open-source development model, a transition which occurred in April of 2016.

On April 29, 2016, the first completely open-source release of the plugin, VersionPress 3.0, was announced.

While VersionPress 3.0 is still considered an early access version of the plugin, it delivers on the original promise to bring version control to the masses. 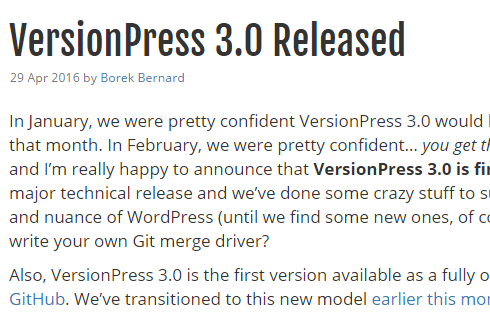 However, that doesn’t mean that all the heavy lifting is done. Several major milestones are still planned for the future.

So what features are still lacking in VersionPress? While much has been done, there is still much left to do:

Taking VersionPress for a Test Drive

VersionPress sounds amazing, so much so that I set up a fresh WordPress installation, downloaded the latest version of the plugin from GitHub, and gave it a test drive.

Here’s what I learned by trying out VersionPress for myself.

If you’ve ever installed a plugin manually, you can install VersionPress. Just get the latest release, head to Plugins > Add New, select Upload and install the plugin. After installing the plugin, activate it.

If your system fails to meet any of the requirements, VersionPress will let you know which system requirements haven’t been met. 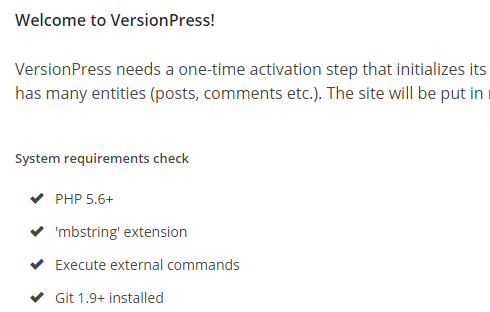 Assuming your system meets all of the requirements, click Activate VersionPress. It may take a minute or two for VersionPress to complete the setup process.

Every change you make on a WordPress site while VersionPress is activated will be logged and visible from the VersionPress admin screen. From this screen, you can see and review the details of every change, undo any change, undo multiple changes simultaneously, and completely revert the website to a previous state.

To get things rolling I made a few changes. Here’s what I did:

Undoing a change was also as easy as it could possibly be. All you have to do is select Undo this. Before the change is undone a confirmation message appears with a reminder that it’s a good idea to have a backup on hand since the plugin is still in early release status.

Reverting multiple changes was also very easy. To test this out I went back to one of the earliest changes recorded and selected Roll back to this. Again, a confirmation message appeared and I had to select Ok to rollback to the previous state.

Surprisingly, when I rolled the site back to the previous state I was immediately logged out of the WordPress admin and when I tried to log back in I found myself unable to do so. After resetting my password I realized what had happened. One of the changes I had undone when I opted to roll the site back was a password change. When I reverted the site to its previous state, my password was changed back along with the other reverted changes.

VersionPress Isn’t Ready for the Masses Yet

My VersionPress test drive was not as smooth as it could have been. The truth is that I ran into several roadblocks while setting up VersionPress and putting it through its paces.

In order to use VersionPress, Git must be available on the server. Prior to writing this article I had never installed Git, accessed it using the control line, or used Git for version control. While I’ve played around with GitHub a bit, I admit that I am not as well-versed in version control or Git as I should be.

At first, I tried to get VersionPress running locally on a XAMPP-powered WordPress installation. However, after an hour or two of research into setting up Git and XAMPP to work together I switched to using my hosting account instead.

Thankfully, I have a Siteground hosting account and Siteground is one of the few shared hosting providers known to support VersionPress. I created a brand new WordPress installation manually, removed all plugins, and installed VersionPress without issue.

However, when I made changes, they weren’t showing up in the VersionPress admin screen. I thought maybe something had gone wrong during installation. So I deactivated the plugin and attempted to delete it planning to download a fresh copy and reinstall it. However, when I attempted to delete VersionPress an error message was generated, the permissions for the directory where WordPress was installed were changed, and a 403 Forbidden error message was displayed when I tried to access the website Dashboard.

After fixing the directory permissions and reinstalling VersionPress, I was able to ascertain that the changes were being logged by VersionPress but not displayed. A hard refresh of the browser window was required to cause the logged changes to appear in the VersionPress admin screen.

Eventually, I was able to get Git installed and VersionPress running on my local XAMPP-powered environment where it runs beautifully. Changes are logged nearly immediately and show up without requiring a hard refresh. Also, just to make sure, I deactivated and deleted VersionPress locally, and no error messages were generated.

The issues I faced when attempting to use VersionPress with my SiteGround hosting account taught me another lesson.

If you try out VersionPress, plan on it taking a little while to get your environment set up properly, and don’t use VersionPress on a production site without keeping separate backups at frequent intervals.

Another realization I came to while looking into VersionPress is that you have to use WP-CLI to access the staging and database merging capabilities of VersionPress. While a user-friendly GUI for non-technical users is in the works, for the time being, WP-CLI is the only way to access these features.

The third lesson learned: If you’re going to use VersionPress 3.0 you need to be comfortable with SSH, know your way around the command line, and be familiar with WP-CLI to get the most out of VersionPress.

What Does the Future Hold for VersionPress?

The team behind VersionPress is pushing for a product that makes staging, database merging, and version control accessible to non-technical WordPress users. VersionPress hasn’t quite reached this lofty goal and there is still progress to be made on several fronts:

Considering the current rapid pace of progress and the financial backing the project now enjoys, I believe it’s only a matter of time until VersionPress delivers on the promise to make version control and site staging a reality for everyday WordPress users. Once that happens, VersionPress will be an invaluable tool not just for WordPress developers, but also for the masses of everyday non-technical WordPress users.

Have you tried VersionPress? Did you face any issues getting VersionPress up and running? Are you excited to see VersionPress reach maturity or do you think it's a passing fad? Let us know in the comments below.

Jon Penland Jon manages operations for Kinsta, a managed WordPress hosting provider. He enjoys hiking and adventuring in northeast Georgia with his wife and kids when he isn't figuring out the ins and outs of supporting WordPress-powered businesses.