When WooCommerce 3.3 was initially released on January 30, 2018, there were many reasons to get excited about the upgrades that came with it. However, it wasn’t available for very long before WordPress removed it from the repository, citing issues for users who had WordPress themes that conflicted with the update.

Thankfully, WooCommerce stayed on top of the issue and had the plugin patched up shortly after the botched release. And, now, here we are with WooCommerce 3.3.1, ready to bring all sorts of major and necessary improvements to the e-commerce plugin.

Today, let’s take a quick look at what happened between WooCommerce 3.3 and 3.3.1 (since there are some good lessons to be learned from it) and then review what we got from WooCommerce 3.3.1.

What Happened to WooCommerce 3.3?

WooCommerce has had some problems in the past. Most recently, they raised prices in a way that led customers to become quite unhappy with them (which is why I had some suggestions on WooCommerce alternatives, in case anyone was looking for them). As you can imagine, the problematic plugin update likely won’t help matters in terms of customer loyalty.

The WooCommerce 3.3 announcement came out on January 31.

To ensure this update is stable, we’ve been doing plenty of testing and QA on our side with an extended beta period, increased unit and integration test coverage, compatibility testing with our extensions, working with customers to do managed updates, and running 3.3 on WooCommerce.com.

Considering what happened just a short while later, it’s kind of funny to see this heavy emphasis placed on the QA and testing of the update.

Once the issues with the plugin start pouring in, WordPress removed WooCommerce 3.3 from the repository. They then notified users that a fix (3.3.1) would be coming soon, but also suggested that, in the meantime, they roll back their WooCommerce installations to the last available release.

The patch was then released on February 6 and users were then able to safely update their WooCommerce plugins to the latest release as they normally would.

In all honesty, the issue wasn’t anything too serious. However, because of the vast number of users affected, the update had to be recalled. Here’s a brief explanation from Lodromanean on what users were seeing and why: 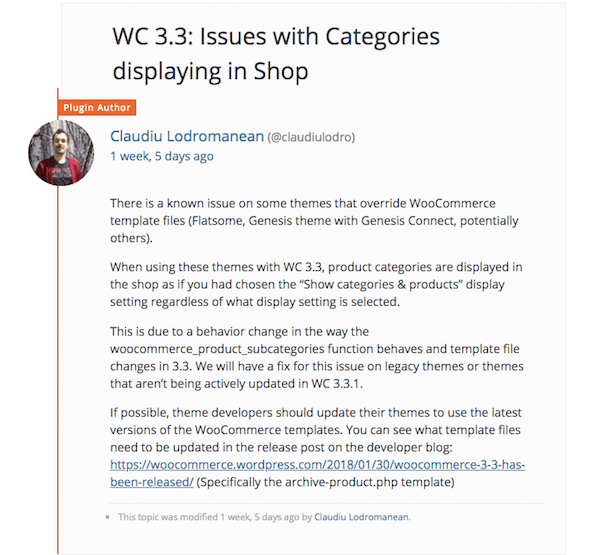 In sum, WooCommerce users were affected if their WordPress theme developer improperly updated the WooCommerce plugin.

In general, when making updates to any plugin or theme (whether it’s your own, one you’re including in your theme pack, or one you’ve added to your WordPress site), it’s best to use hooks to update template files. If you directly update the files themselves, there’s the potential you might run into plugin conflicts like this one (or worse).

Now, this isn’t the first time WordPress plugin conflicts have caused a malfunctioning in WordPress after an update was released. It’s just a surprise to see this happen to a very well-known e-commerce plugin like WooCommerce (not to mention one owned by Automattic). You’d think that extra care would be taken before releasing a new update.

That said, the issue wasn’t too serious and the WooCommerce team was great about being transparent about the problem and kept customers attuned to when the next minor release and fix would be available. So, at the end of the day, this plugin conflict ended reasonably well and users got some really awesome upgrades to their plugin after all was said and done.

Now that we’re on the other side of this, there are a few things you can take away from this as a WordPress developer:

Alright, so we now know what went wrong and we also know how to protect our WordPress sites from these kinds of problems in the future. Can we look at the positives of this WooCommerce update now?

With the drama out of the way, let’s get into the good stuff. If you’re currently using WooCommerce on your site or about to start the process of monetizing your business with WooCommerce, then here is what you need to know about 3.3.1’s new and improved features.

For users that are brand new to WooCommerce, the setup process has become even more streamlined. And, not only that, there are more store gateway options offered in the setup wizard, which means less work to get a store up and running.

WooCommerce has cleaned up the Orders screen:

Note how easy the interface is to read through now. Unclear icons have been swapped out. We now have large, colorful status indicator buttons as well as easy-to-understand action icons.

In addition, there is an eye icon sitting directly to the left of the order date. 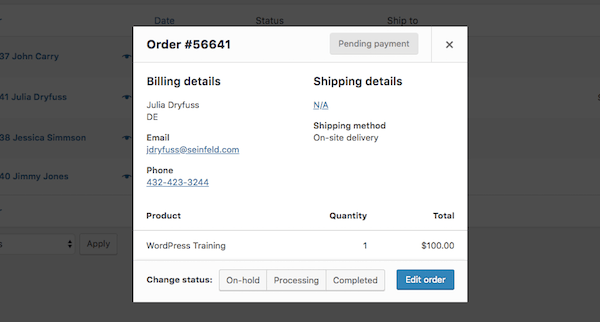 When you click on the eye, a popup will not only give you a high-level overview of the order details, but it also gives you the ability to edit the status right from within the popup.

There is a new option available under Product setup called “Manage stock?”:

When clicked, you can manually update the quantity of stock available and give customers the option of putting an item on backorder when stock levels run low or out completely.

As with the updates to the Orders screen, you now have a better view of what’s happening with your Products, too. In this case, it pertains to how clearly stock availability is displayed:

As you can see, backordered items now show up in orange, letting you know when inventory needs to be replenished.

There is a new report available for those of you who sell digital content on your WordPress site.

When you navigate to the Reports screen, click on “Orders” and then “Customer downloads” to find out more about who is downloading your content and when.

This update is mostly conjecture, as WooCommerce claims that WordPress users shouldn’t have to use a theme built specifically to work with WooCommerce. Here is what they said:

We’ve improved the way WooCommerce renders on themes that don’t formally declare WooCommerce support, so now you should be able to use WooCommerce with almost any theme from WordPress.org.

I can attest to the fact that my WooCommerce products look fine with my WordPress theme; however, they were compatible in the past.

If you’re considering moving to a new WordPress theme and you’re concerned about its compatibility with WooCommerce (if it’s not explicitly compatible), I’d suggest you test the theme with it before downloading. If you’re not able to do that with a premium WordPress theme, then reach out to the theme developer for confirmation that it will work just fine.

When WooCommerce is activated in WordPress–regardless of which theme you use–a new module will appear in your Customizer tool. 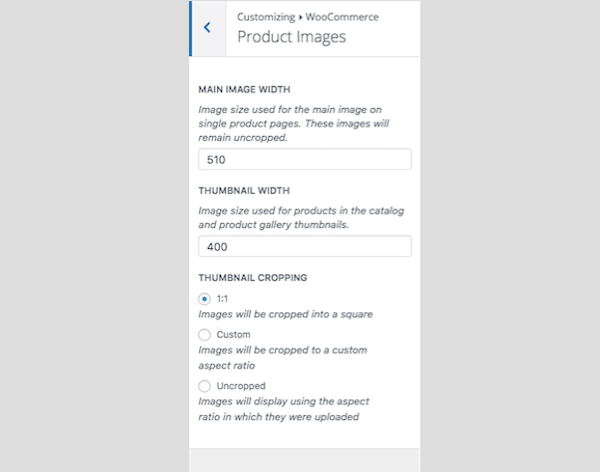 WooCommerce updated the options here so that users would have better control over image sizing and thumbnail generation. As you can see, it’s not a drastic change, but it will spare you from having to resize your thumbnails manually or to install another plugin to do it for you.

If you’re still in the Customizer scoping out the new image settings, be sure to also look at what’s been done with the “Product Catalog” tab. 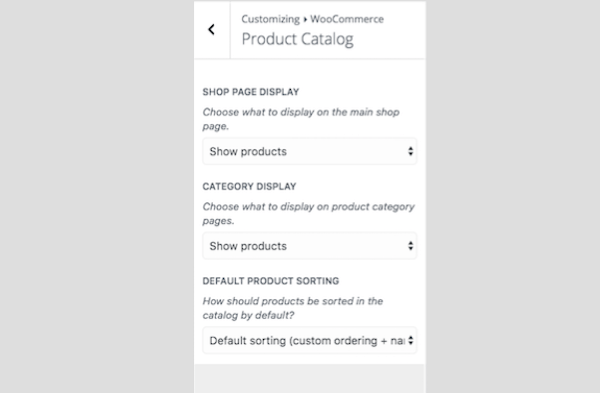 Note that when you update how you want your store and products to be displayed, the changes are reflected in the “live” display on the right now.

As your online store grows, you may find that your WooCommerce plugin would benefit from a number of extensions. In this release, WooCommerce has made it even easier to search for them right within WordPress. 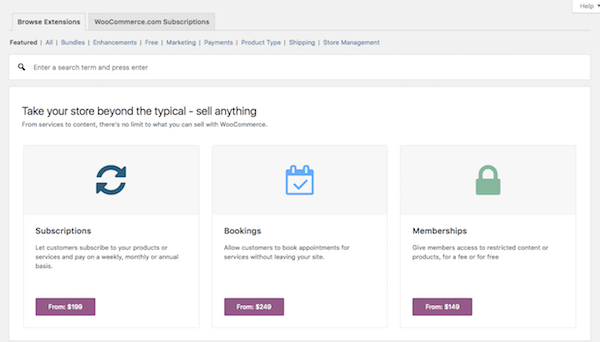 Simply visit the “Extensions” tab under your WooCommerce sidebar in WordPress. Then use the search function to find the extension you need.

There are three new features added specifically for WordPress developers. In sum, here is what you can look forward to:

It’s a shame that the botched release of WooCommerce 3.3 had to get so much fanfare because I’m sure it tested the patience of many a user who simply wanted to get the newest version activated on their site. Is this an argument against automating updates in WordPress? No, I don’t think so.

I think it’s inevitable that plugin conflicts will arise from time to time. So long as you take care to always back up your site before processing updates and then make sure to check your site afterward for any issues, you can keep on handling updates as you always have. Just maybe be a little more wary of plugin and theme authors; you can keep hoping for the best and enjoy the benefits of using these WordPress integrations, but always prepare your site for the worst (fingers crossed it doesn’t come to that!)

Over to you: Were any of your sites affected by WooCommerce 3.3? Did you spot the category errors before WooCommerce noted them?