Close
WPMU DEV Logo Why is WordPress Free? Who Pays For It? How Much Does It Cost?

Why is WordPress Free? Who Pays For It? How Much Does It Cost?

Millennia ago, a cool compassionate dude took a few loaves of bread and fish and multiplied them to feed thousands of hungry folks. Or so the myth/belief goes, depending on how you view it.

Almost 2 thousand years later, humans would invent technology that would pretty much allow the same: Code.

So, “what does this have to do with WordPress?” you may wonder.

A lot, actually! We’ll come back to this in a bit.

Prefer a video instead? You’re in luck :)

This is a question many who are looking to create their first website ask.

And the answer is YES.

WordPress is a free and open-source software (FOSS) that you can use, modify, and redistribute as you wish. 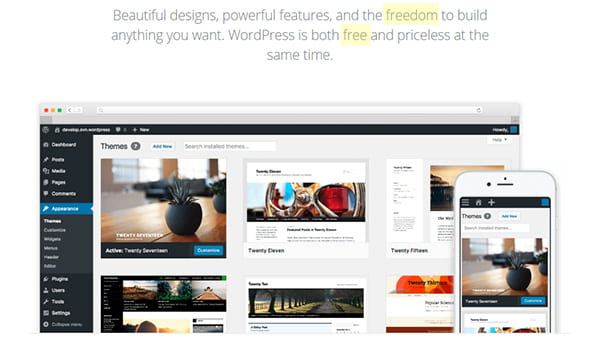 Note: By WordPress here, I mean WordPress.org, the self-hosted, free, open-source platform. Not WordPress.com, it’s a related but totally different commercial cousin. You can read more about their differences here.

“But I Still Have to Spend Money to Use It, Right?”

While WordPress, the software, is free, using it to create a live website does incur some costs.

This isn’t a limitation of WordPress as such. All websites hosted online work this way, whether you use WordPress to build them or not.

You need to rent resources on a web host to serve your WordPress site to the world.

WordPress hosting costs as little as $4/month to 1000s of dollars depending on your site’s needs. Most website owners settle for something in between, striking the perfect balance between value and cost.

Note: If all you want to do is try WordPress out, just to experiment or learn, you can do it without spending any money by installing WordPress locally on your PC.

But Why is WordPress Free?

This is easier to grasp by reading the license.txt file included with every WordPress download. 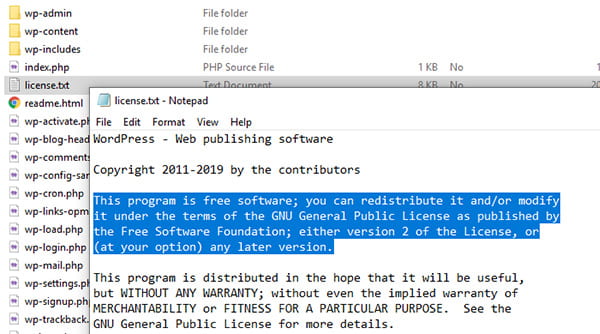 What Exactly Does “Free Software” Mean Though?

To understand this, we have to go back in history and take a look at the origin of free software movement (FSM). It’s a social movement with a goal to guarantee certain freedoms to software makers and users alike.

It’s inspired heavily by the traditions and philosophies of the 1970s hacker and academia culture, which encouraged sharing knowledge and DIY.

FSM was founded in 1983 by Richard Stallman by launching the GNU Project at MIT. FSM was (and still is) a mass-collaboration, free-software movement, the likes of which humanity had never seen before.

Its turning point came in 1985 when Stallman established the Free Software Foundation (FSF) to support FSM. A few years later, in 1989, Stallman wrote the GNU General Public License (GPL or GNU GPL) for use with programs released under the GNU Project.

The GPL license allowed people to study, run, share, and modify the software code as they wished.

In a way, code is an intangible thing like knowledge or ideas. You don’t lose your knowledge or ideas if you share them with others. On the contrary, it only makes them even more widespread. Free software is meant to do the same.

Another ethical argument put forward by FOSS advocates is that since the software can be copied and distributed at scale with minimal resources, the super high profit margins make it unjustifiable beyond a certain point.

Most of the richest companies in the world today are software companies. Many of them use FOSS tools in their daily work, while still keeping their core software locked. And they keep getting richer and richer.

These two arguments are essentially the main reason why FSM activists want code to be free.

On GPL and Free Software

GPL has gone undergone two major revisions since its inception in 1989 (v2 in 1991 and v3 in 2007). But its core philosophy has remained the same. It’s defined by its adherence to 4 Fundamental Freedoms that are considered essential to any “free software”:

WordPress.org lists these freedoms as their philosophy too.

One core tenet of GPLv2 license is that if you make any modifications to the software licensed under it, the modified code MUST also be licensed under GPLv2, and released along with build & install instructions.

With these stats, I’m not exaggerating when I say that free, open-source software has changed the world.

WordPress as a Free Software

WordPress was born out of the same philosophy as FSM. It was created in 2003 by Mike Little and Matt Mullenweg.

They started it by forking a popular-but-abandoned blogging platform called b2/cafelog.

You may find this hard to believe, but the most popular blogging platform today was itself conceived in a blog post by Matt, and its co-founder Mike, was the first one to comment in support of it.

In 2010, the WordPress founders established The WordPress Foundation as a charitable organization to further the mission of open source, GPL software.

It’s also a way to distance themselves from it to avoid conflicts of interest, since they have a commercial service running in parallel called WordPress.com.

Today, WordPress is updated continuously and maintained by The WordPress Foundation and thousands of contributors from all walks of life.

What About WordPress Themes and Plugins?

As per GPLv2 license, all derivative works, such as plugins or themes of WordPress, should inherit the license too.

Drupal (another popular CMS platform), which uses the same GPL license as WordPress, has a well-drafted Licensing FAQs page that explains what a “derivate work” means clearly.

However, in practice, this is much harder to enforce. There’s some legal gray area when it comes to what’s derivative work or not. According to WordPress.org’s licensing page: “we feel strongly that plugins and themes are derivative work and thus inherit the GPL license.”

How Do People Who Make WordPress Make Money Then?

This is a question that has been troubling many FOSS developers for decades.

How does one make money while providing the code they work on for free?

The simple answer is that you don’t make money by selling the code alone. It’s pro-bono work, done for the greater good, like feeding the hungry or cleaning your neighborhood.

However, there are many other ways for FOSS developers to sustain themselves.

WordPress contributors can follow any of the business models of open-source software. They can use their knowledge and expertise to serve as consultants and/or provide support. Or perhaps, they can build custom applications on top of WordPress for clients ready to pay for their professional services.

Some WordPress developers also make money by creating valuable themes and plugins. These can be completely free (supported by voluntary donations or crowdfunding), free with restricted features (paid premium add-ons), or totally pay-to-use (hey, no such thing as free lunch).

A few of these developers have gone on to found successful multi-million dollar enterprises. Some even offer hosting solutions optimized for WordPress.

Automattic Inc., a company started by WordPress co-founder Matt, is the perfect example of this. It’s notable for its WordPress.com platform, which provides an easy way for everyone to build a website without worrying about hosting and other tech-heavy stuff.

WPMU DEV, the company whose blog you’re currently reading, is another example of a successful business built around WordPress. If you’re looking for more inspirations, here’s a list of some of the most successful WordPress businesses.

WordPress marches on as the most popular platform to build websites. Whether you want to build a simple personal blog or a complex website selling thousands of products, WordPress can do it all with ease.

There are 54,000+ free plugins listed on WordPress.org’s repo alone, some of which are exceptionally excellent. As our commitment to the free software movement’s mission, we’ve released free versions of our most popular Pro plugins on WordPress.org.

You can also find many beautiful free themes for WordPress and build any kind of website in minutes. And if you want to go even further, WPMU DEV offers top-notch premium plugins and supercharged hosting, not to mention our stellar 24/7 support.

If you’re using WordPress in any way, take pride in knowing that the spirit of the free software movement lives on through you!

How free is WordPress for you? Share your thoughts with us in the comments below.

Salman Ravoof A self-taught web developer, writer, and creator. He finds science, philosophy, technology, and food exciting. When he's not busy exploring the dankest memes on the web, he can be found petting cats and cooking delicious meals. And sleep, lots of it!