WordPress may be free to download and use, but that hasn’t stopped the platform as a whole gobbling up global market share as WordPress-based businesses generate ever increasing – and impressive – revenue.

Businesses across the world are increasingly looking to drive profits by using the power and flexibility of WordPress to explore a variety of revenue models.

With WordPress targeting further expansion in the immediate future, now is an excellent time to take stock of the increasingly commercial focus on the software.

In this article, we’ll look at the various ways companies are making the most of WordPress and pull out some real revenue figures along the way to highlight just how big a business it has become.

Let’s kick things off with a look at the general landscape.

The Increasing Commercial Focus of WordPress

The amount of value WordPress has provided as an open source software project over the years is finally starting to be reflected in the form of cold, hard cash with commercial matters increasingly coming into sharper focus across the ecosystem.

The highest profile example of this is of course Automattic. An early 2014 funding round of $160 million put the company’s provisional value north of a billion dollars, and the recent Woo acquisition shows they’re more than prepared to flex those new-found financial muscles and pursue the huge prize that is the global eCommerce market.

Though Automattic looms large in the WordPress landscape, it’s far from the only company making a healthy living from the software: individual developers are also cashing in.

The 2014 WordPress survey – highlighted in that year’s State of the Word address – showed 25% of respondents saying they made their living primarily from WordPress.

Niching down a little further, a recent survey of Genesis theme developers showed an average hourly rate of $84.

However, one of the most interesting shifts in the past few years has occurred in the middle ground. A whole slew of small to medium sized companies have emerged that, one way or the other, are basing their entire strategy around WordPress.

As a side note, WPMU DEV is, of course, a great example of this trend. Those interested in digging into the background of the company should check out Mixergy’s excellent interview with James Farmer for some behind the scenes info.

Scott Bollinger recently put together an interesting overview of notable WordPress commercial successes with accompanying revenue statistics that demonstrate the type of money in play across the board these days.

Let’s step through a few of the most notable models that are out there.

Outside of custom development and design work, commercial theme and plugin markets have long been two of the largest business opportunities for WordPress experts.

Licensing issues remain a potential ongoing point of concern, but the sheer size of the theming and plugin space suggests they will be driving revenue for many years to come.

The 800-pound elephant in this particular room is, of course, Envato, owner of both the ThemeForest and CodeCanyon marketplaces. As one of the world’s most popular websites, ThemeForest alone can push some serious eyeballs towards products and the power of that traffic has resulted in impressive sales for individual providers.

A recent overview from Envato confirms the company has over 31 authors who’ve surpassed $1 million in sales, with WordPress themes dominating that list.

Independent plugin businesses such as WP Rocket and Gravity Forms are also reporting impressive numbers. The former recently pulled back the curtain on its journey to $35,000 in monthly revenue while the latter – with over a million sites using its solution – has claimed its yearly revenue is somewhere in the millions.

With the REST API just around the corner, the potential market for both themes and plugins is about to significantly expand. Expect to see an influx of developer talent into the WordPress space over the next few years and an explosion in entirely new theme and plugin-based businesses.

Another sign of the increasing economic maturity of WordPress is the fact that it can now support service-based businesses targeted specifically at the platform itself.

Two recent examples can be seen in the emergence of WordPress support services such as WP Curve from Dan Norris and Ryan Sullivan‘s WP Site Care. WP Curve has been particularly transparent in tracking its journey to success with regular revenue reports and deep-dives into the creation and growth of the business via interviews with Dan Norris and his book The 7 Day Startup.

To cut a long story short, Norris was able to build a seven-figure business in eighteen months through a combination of his own considerable business chops and WordPress’ ubiquity. It’s an impressive achievement that shows what is possible by leveraging the platform.

When you claw your way up to the number one spot in terms of the worldwide CMS landscape, it is only a matter of time before you start attracting serious attention from the hosting industry.

The past few years have seen most of the traditional big players in that area scrambling to get on board the WordPress bandwagon.

Dreamhost, HostGator, Bluehost and GoDaddy are just some of the hosting heavyweights offering WordPress focused packages nowadays, and there has been a recent surge in companies that make it their business to target WordPress exclusively.

WP Engine, Pagely and Synthesis are three of the standout offerings in this regard and have benefited considerably from their targeted approach. WP Engine continues to raise funding with a view to expanding into the enterprise market and has seen its headcount expand to over 250 employees.

The WordPress-only hosting niche is even big enough to contain its own sub-niches – for example, the primarily design-focused hosting company Flywheel recently successfully secured seed round funding.

As WordPress’ share of the overall online market grows, opportunities in this space are only going to increase and companies such as WP Engine – with their focus on the platform and lack of legacy concerns – are well-positioned to dominate.

The ease of use of WordPress in terms of both administration and content creation has also, unsurprisingly, attracted the attention of the global affiliate community.

In addition to bloggers who’ve traditionally turned to affiliate programs when looking to monetize their writings, there is of course a healthy online market in sites that are primarily affiliate plays – evidenced by sites such as Flippa and Empire Flippers.

WordPress is very much the CMS of choice for such offerings.

Its ubiquity, developer pool and simple options for handling multiple sites such as ManageWP make it a no-brainer for basing a site on.

The WordPress ecosystem itself contains many attractive affiliate offers for items such as hosting and premium themes and plugins.

The platform – in addition to its out-of-the-box excellence in areas such as SEO and content management – also supports a number of plugins that make affiliate management substantially easier.

There has been something of a trend in the affiliate and digital marketing community over the past few years to publish regular revenue breakdowns and some of the figures are eye-watering. Pat Flynn, for example, is regularly posting monthly revenue rates of over $100,000 dollars with much of that income being directly generated via WordPress sites.

Automattic’s recent audacious acquisition of WooCommerce has brought home to many just how well-positioned WordPress is to take a run at the global eCommerce market.

With a target market share of 50% for WordPress, it should naturally be expecting to make increasing inroads into online sales. WooCommerce, in its few short years of existence, has managed to carve out an impressive share of the market for online stores and claims 24% of the market. Given Shopify‘s recent billion plus IPO valuation, Automattic’s purchase could be considered something of a steal.

The WooThemes site contains an impressive array of case studies of real world eCommerce sites being run through WordPress. Standout implementations such as those on Entrepreneur.com and The Spectator suggest WordPress can deliver when it comes to eCommerce at scale.

Membership as a business model is nothing new of course, but the ability of businesses to easily offer these packages online has been substantially aided by a new wave of WordPress plugins over the past number of years – including our own Membership 2 Pro plugin.

Chris Lema from Crowd Favorite has a good breakdown of options in this area and MemberMouse – one of the most prominent membership plugin providers out there – showcase a range of seven-figure businesses built on the membership model. 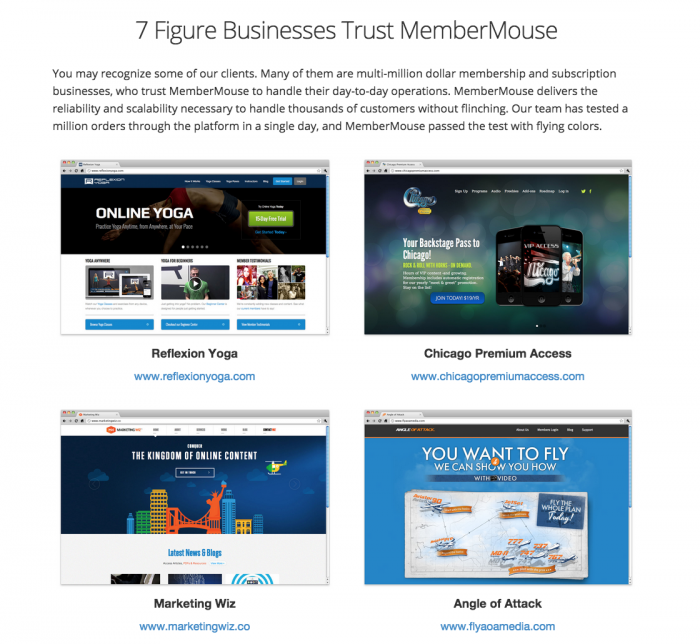 The popularity of WordPress among Fortune 500 sites has increased demand for WordPress experts at the top end of the consulting scale and the increasing commercialization of the platform opens doors for experts all along the line.

Some sites are positioning themselves to help train the next generation of WordPress consultants, while individual, high-profile developers such as Mark Jaquith have carved out positions with hourly rates as high as $350 per hour based on their expertise.

We’ve touched on the worlds of individual developers and consultants so far but there is another tier of WordPress businesses that deserves mention in isolation – agencies.

WordPress.com lists a number of featured commercial partners on their service partners page and, as the market expands, consolidation is taking place within the space as evidenced by the recent acquisition of Sennza by Human Made.

As WordPress continues to eat into the Enterprise market, expect an increasing number of full-service agencies to emerge with WordPress at their core.

The ever increasing focus on commercial matters within the WordPress landscape is a natural outgrowth of the software’s incredible uptake and flexibility – there’s only one way to go, and that’s up.

As the platform grows, we can expect to see more and more businesses worldwide put WordPress at the center of their operations, and continue to make even more revenue.

We’re curious to hear how WordPress has contributed to your own bottom line and where you see the next developments coming from. Let us know in the comments below.