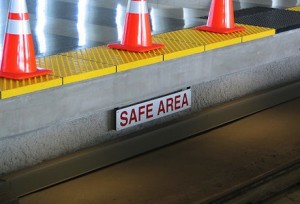 Cloud computing has taken over my life.

I use Dropbox and Google Drive to store and share documents. I use Evernote to keep track of everything from my shopping list to my plan for world domination (it’s a secret). iTunes is all but redundant to me now — Spotify is now my music app of choice.

And then there’s WordPress — a form of cloud computing in its own right. Content production is just so damned easy — you log in, fire up a new post, and you’re off to the races. Any content you produce in WordPress becomes available to you (and anyone else) across any device. And best of all, with WordPress’ “Save as Draft”, autosave, and revision history features, your content is totally safe and secure.

I lost a post on WordPress for the first time a couple of weeks ago.

There I was, busily writing a lengthy article for a client. I finished up, hit “Save as Draft”, and let the client know that the post was ready to check.

After a few minutes, I got an email back along the following lines: “What post?”

My heart sank. Surely enough, the post that I had spent all morning writing had all but disappeared — with bizarrely just the first paragraph and a half still intact. I have no idea how this happened, but one thing was certain — I had to write the post all over again.

This process nearly repeated itself (under different circumstances) last week. Having finished writing a post, I went to click on “Save as Draft”. Somehow (and I’ll admit this was quite special), I managed to hit “Move to Trash” instead. No problem though, right? God bless WordPress’ autosave feature.

Not so. I restored the post from the trash, but all I found within was the outline notes for the post that I had started with two hours previously. My heart sank (again). Fortunately, I hit the back button a few times and managed to recover the post from my browser’s cache, but that was just dumb luck. WordPress had lost two posts of mine in two weeks.

Here’s my problem with those otherwise reasonable questions — we operate in a world of convenience and expectation. Usability 101 dictates that a feature should perform exactly what is expected of it.

WordPress has an “autosave” feature — therefore, I expect it to save my content automatically. I don’t expect that I should have to use the “Save as Draft” feature as a backup, nor do I expect to doubt the reliability of the aforementioned autosave feature.

Do I expect WordPress to protect my content flawlessly? Yes, I do (to the reasonable extent permitted by technology). I think it should be one of the biggest priorities of WordPress developers. After all, our sites are nothing without content.

After my unfortunate run-ins, I was keen to discover what other people thought about content production within WordPress. So, I put a question out on my Facebook page. The responses I got surprised me:

I have done this very thing and it is gut wrenching, to say the least. Unfortunately, hitting back on my browser did not restore my post. I now type my post in Word and only when complete do I move to WordPress.

I draft everything in Byword or Writings, better to be safe than sorry…

I draft my posts in Word and transfer to WordPress to polish up, add photos and finalize. It’s saved me more than once!

I do a rough draft in word before switching over to WordPress. That way, I only lose some of the work – instead of all of it.

Unbeknownst to me, it seems like an awful lot of people are writing their content outside of WordPress. And all along I’ve been blindly writing in WordPress, as if it’s the done thing. Silly me.

Are we not staring a major issue right in the face here? WordPress users are so doubtful of WordPress’ ability to keep content safe and sound, that they’re not actually using it until it is absolutely necessary! Surely a widespread lack of faith (assuming for a moment that it is) in one of the important WordPress features is something worth taking note of?

What Can WordPress Learn from Google?

My recent WordPress woes happened to coincide with another content-related issue. I recently finished writing a 4,500 white paper for a client. A few days later, I received a mildly panicked email from the client, asking why a considerable chunk of the content had disappeared. I had no idea (as I had been nowhere near the document since finishing it), but I decided to investigate.

I have never been a prolific Google Drive (or Google Docs) user, but I had used it for this particular project, at my client’s behest. I was however familiar with the fact that it seems to have a pretty proactive autosave feature:

So I loaded up the document, and clicked on the “Last edit was made..” link in the toolbar, not really knowing what I would find. What I did find was revision history heaven: 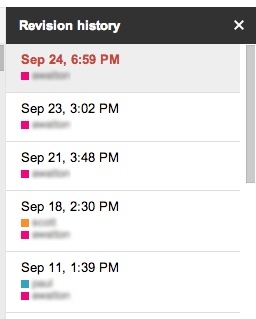 I was pretty impressed at this point. I clicked through to a prior revision, and Google Drive highlighted the changes that were made, color-coded by user. I quickly discovered that someone else had deleted a whole chunk of content (for reasons unknown). The original document was quickly recovered, and everyone was happy.

Although the content had been rescued, I was curious about how much detail Google went into in terms of revision history. So I went to a recent document I had been working on and clicked on the “Show more detailed revisions” button. I was then presented with a list of what appeared to be every single autosave ever made on the document: 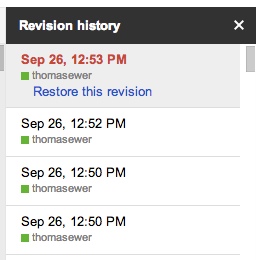 At this point, the WordPress user inside of me was getting serious revision envy. The quality of Google Drive’s revision history is quite astonishing, and makes WordPress’ look pretty woeful in comparison.

Because I lack technical expertise, I have the benefit of simply being able to say, “I want this”. However, I am not completely naive to the potential limitations that clever developer folks have to confront and overcome. However, surely the time has come for WordPress to initiate a major improvement of all functionality relating to the saving of content?

After all, let’s not forget the scale of the product we are dealing with here — WordPress is the most popular content management system in the world, with tens of millions of users across the world. We can aim high.

So, I welcome comments below regarding the technological limitations WordPress developers face in trying to produce improved revision control, but I would also love to see suggestions as to what can be done. Because as far as I am concerned, WordPress is not doing a good enough job until people are confident enough to actually use it.