The default Page and Post content types in WordPress are enough for many websites, but if you really want to harness the powers of WordPress as a CMS it’s time to start learning about custom fields and metadata.

In this part of the series, we’ll focus on how to create and display metadata in WordPress, including post metadata or custom fields as they’re often known. You’ll learn:

Let’s get stuck in.

Missed a tutorial in our WordPress Development for Intermediate Users series? You can catch up on all seven posts here:

What is Metadata in WordPress?

Let’s start by defining metadata. What exactly is it?

“… data that provide information about other data.”

In WordPress this means that metadata is data about the core content, which includes posts (of all types), comments, users and taxonomy terms. An easy way to identify this is by looking at the database structure, which you can see in the diagram below: 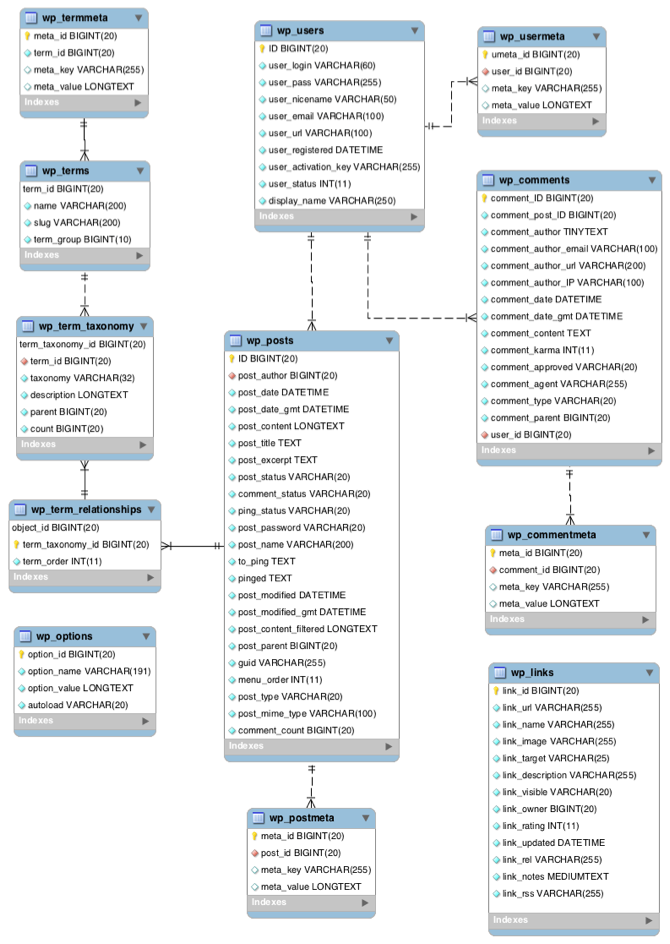 There are four database tables for data:

Each of these has a corresponding table for metadata about the relevant type of data:

You don’t need to worry about all this too much at this stage – the database will be covered in more depth in our upcoming Academy course WordPress Development for Advanced Users. All you need to know is that metadata exists and how to access it, which you’ll find out about if you read on.

Adding custom fields is very simple but displaying them involves writing some code in your theme or hooking it in via a plugin. Let’s take a look at both.

The simplest way to add post metadata is by using the built-in custom field interface in the post editing screen. Here is one of the posts in the demo site I’ve been using with this series: 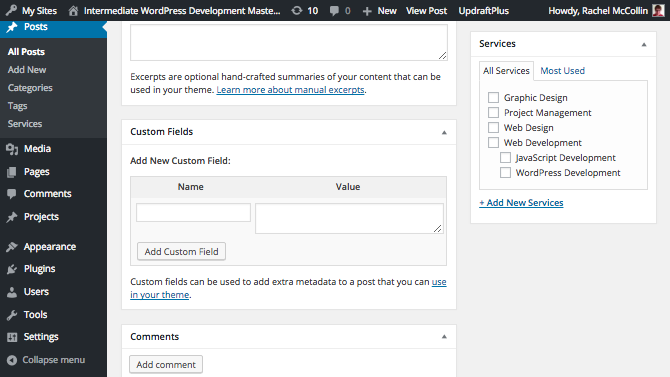 Once you’ve added one, you can use that name again for additional custom fields on that post and others.

If you want to display the values of your custom fields, you’ll need to add some code to your theme. Alternatively if you have hooks in your theme, you can insert it using those via a plugin, which you’ve already learned to do in this series.

Let’s add custom field display to the single post template in our theme.

Start by opening the template file in your theme that displays the loop for single posts. In the theme we’ve been working on in this series it’s loop-single.php. If you haven’t been working along, you can download the Part 5 version of the theme via the series source files on GitHub.

Note: If you’re working with your own theme, you may need to work in a different template file. Adapt what I’m doing here for your theme.

Save your file and take a look at a post for which you’ve added a custom field. It won’t look perfect now, but by using the post-meta class you’ve accessed styling we already set up for a custom post type in an earlier part of the series. I want to remove the bullet points and tweak the margins and padding, so I’ll make some changes to the stylesheet. You can find them in the source files for this part of the series. 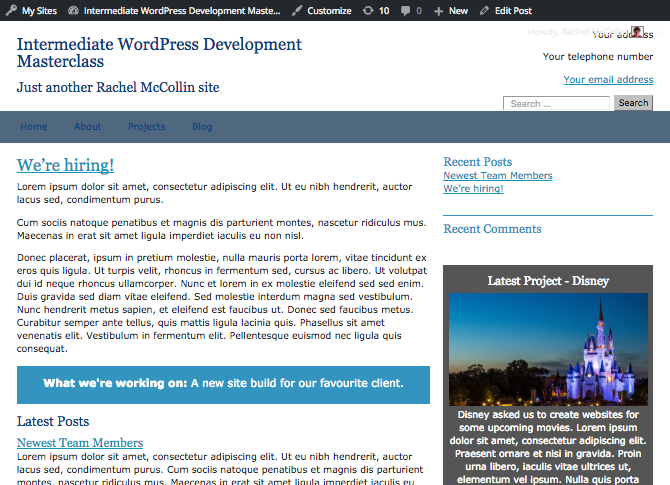 You can add whatever styling you need. Note that I’ve taken advantage of the span tags that WordPress automatically puts around the name of the custom field to add bold styling.

If you want to have more control over the way your post meta data is displayed in each post, you can use the get_post_meta() function instead and then echo out its results. You can see this in action in our post on working with custom fields and I’ll also cover it later in this part of the series.

Using the custom fields interface is all well and good, but it doesn’t give you much control and it can result in your users making mistakes. What if you want to limit the values for a post meta field to a few options and not let users type in their own? Or you want to predefine some post meta fields for consistency?

The way you do this is by creating a metabox in the post editing screen, using the add_meta_box() function. This function has no less than seven parameters:

Let’s create our own function to do this, which will help all of these parameters make more sense. I’m going to create a new plugin that will both add the meta box and output what’s added to it via a hook in my theme.

So start by creating a new plugin and adding the usual commented out text at the top.

The first step is to write the function that creates the metabox. In your plugin, add this:

This sets up the metabox, with the following parameters:

Don’t try saving your plugin just yet: you need to create a callback function or WordPress will throw up an error.

The callback function defines what will be displayed on the post editing screen, which is a form. You need to use the get_post_meta() function to display the value of a particular meta key.

Add this to your plugin:

Let’s take a look at what this does:

Now save your plugin and take a look at the post editing screen on your site (making sure you’ve activated your plugin first). 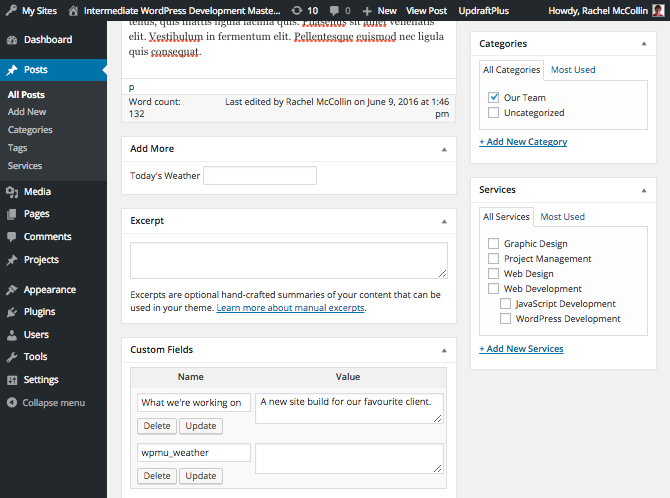 You’ll notice that the wpmu_weather field has also been added to the custom fields below. That could be confusing so we’ll fix it shortly.

If you type something into that metabox it won’t save. That’s because we still need to add a function for that.

Adding a Function to Save the Metadata

Let’s walk though that function:

Now try adding a value to your field and saving your post: 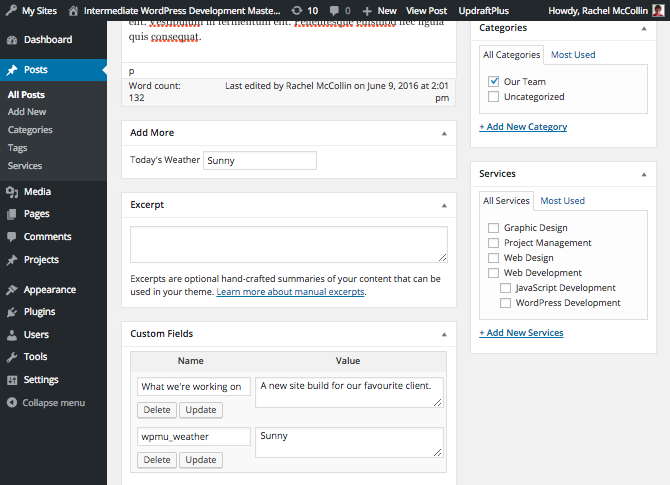 That works. Now let’s see how it looks on the site: 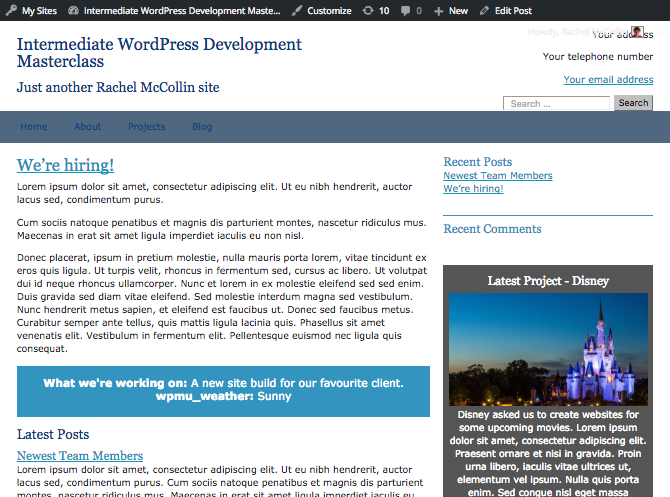 That doesn’t look so good. Because we used a name for the field of wpmu_weather and not something more user-friendly, it’s not very nice to read. We could fix that by changing that name, but I’d rather not as it’s good practice to use a unique name with a suffix. So let’s change the way the metadata is output.

To add more control to the output of metadata, we replace the_meta() with some more content using the get_the_meta() function.

Let’s add this to our plugin and then activate it via the wpmu_after_content hook in our theme. If your theme doesn’t have an action hook after the content, add one. You learned how to do this in part one of the series.

In your plugin, add this function:

Here’s what the function does:

Because I’ve used the same classes as WordPress does with the the_meta() function, the styling works fine. If you prefer, you can add this styling to your plugin. The demo plugin in the source files has an empty stylesheet that I’ve enqueued following the technique you learned earlier in this series – feel free to add your own styling to it.

Here’s my metabox on the site: 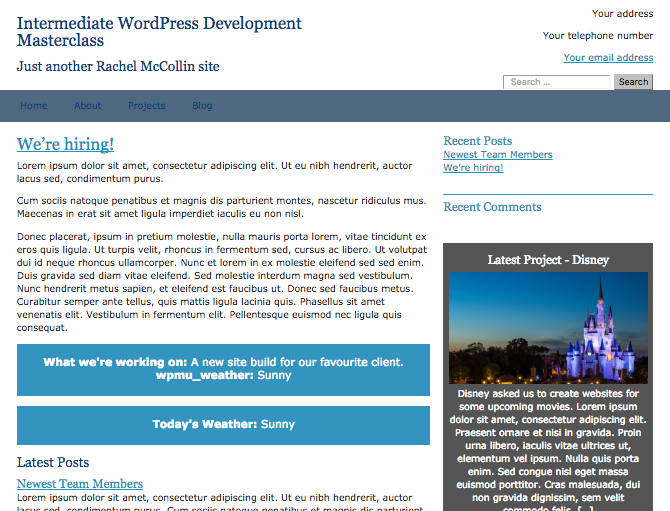 Right now there are two boxes with metadata – I’ll comment out the code for the first one in the theme so it’s still there for reference but doesn’t output anything. You might want to delete yours.

In your plugin, add this:

Now if you visit your post editing screen, all you can see is the metabox you added: 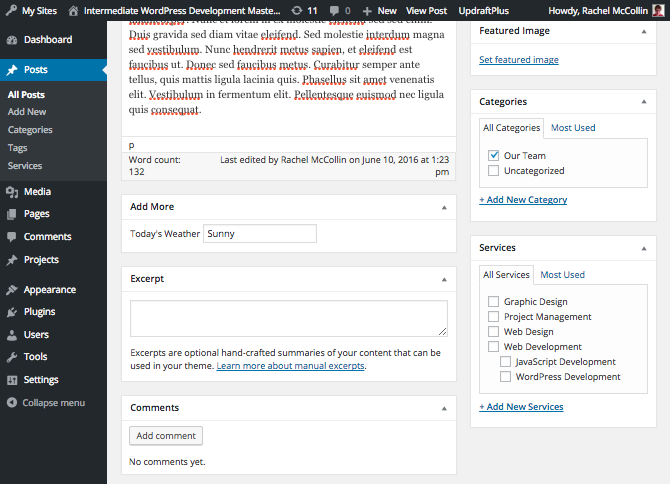 That gives us more control – users will only have access to the metadata field we’ve created.

Displaying Other Kinds of Metadata

You’ve already learned how to output some term metadata in part four of this series, when you output the term description on its archive page, using the term_description() function. Here’s what this looks like: 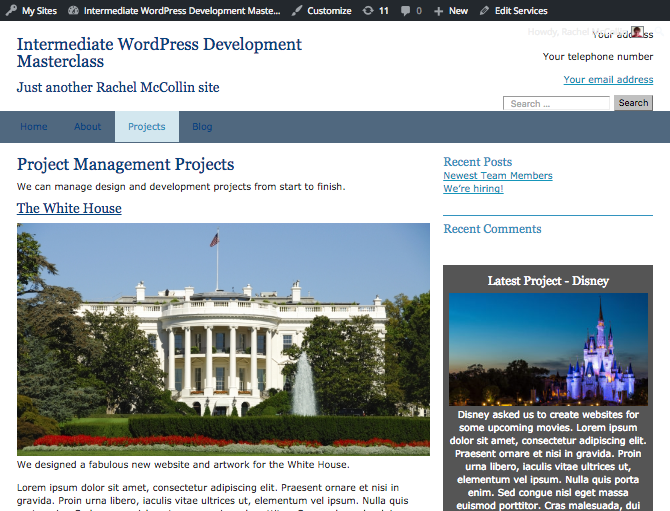 Let’s add some author metadata to our loop-single.php template file, along with some post metadata with information about the date the post was written.

This displays the author’s name and the date on which the post is written. Because I’ve included a conditional tag, it only does this on posts, not projects.

Note: You may have noticed that there are now two conditional tags in our loop-single.php file. You might prefer to create a different version of this file for each post type. You should be able to work out how to do this using what you learned in part one of this series about the template hierarchy.

The author and date are now displayed on my site: 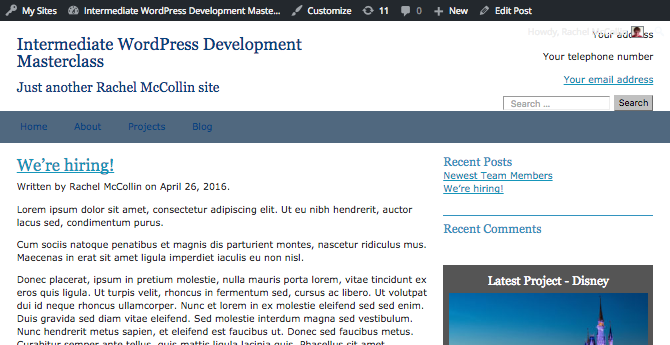 Let’s make it a bit more helpful, by including a link to the author’s archive page. You do that by replacing the the_author() tag with the_author_posts_link().

Now the author’s name is displayed with a link: 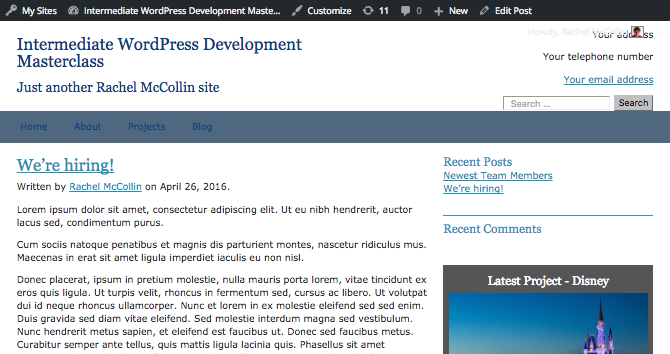 You can also display metadata relating to taxonomy terms – you should remember learning about that earlier in this series. Why not try applying what you’ve learned in the previous part on working with custom taxonomies to your loop-single.php file, and adding the taxonomy terms for the post to the single post page.

I’m not going to work through this in detail but I will give you some hints:

If you get stuck doing this, check out the source code. I’ve also added some styling to my metadata. Here it is: 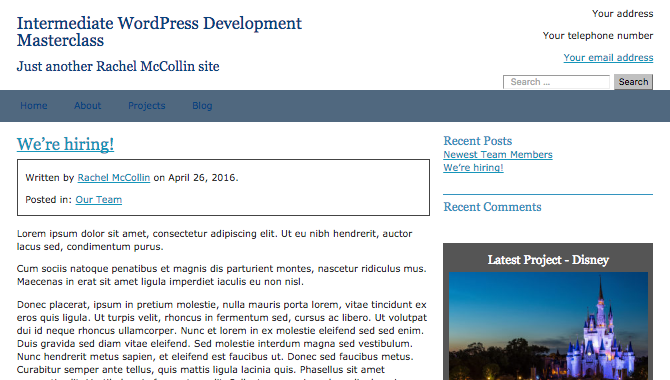 Feel free to add whatever metadata you want to your post and style it more imaginatively than I have!

Metadata Adds an Extra Layer to Your Data

Metadata is another way to get even more control over your data in WordPress. Use it for extra information about users, comments, taxonomy terms and posts themselves, and you can then puppet it in your theme or plugin however you want.

In this part of the series, you’ve learned what metadata is and how to create a metabox for adding it to posts. You’ve also learned how to display other kinds of metadata about a post.

Why not try experimenting with more metadata in your theme?

Did you find this tutorial helpful? Why do you want to learn WordPress development? What do you want to know more about? Let us know in the comments below.
Tags:
Share this article