“When I first read the dictionary,” goes an old joke by comedian Steven Wright, “I thought it was a poem about everything.”

Part of what makes that joke funny, of course, is that dictionaries (and glossaries alike) get a bad rap for being nothing but boring old reference material. But boy are they useful when you need them.

Some sites seem to positively cry out for a glossary (i.e. a mini dictionary). And yet those that have them are few and far between.

If your site might be ripe for a glossary, then you’ll probably be interested in the plugins we have reviewed below.

Also, be sure to check out the overall reviews at the end.

The WP Glossary plugin lets you create a glossary of terms and then both provide a pop-up tooltip for terms in posts and also link to the term on the glossary page.

Terms are created with custom post types, and so you have a full editor at your disposal. You can also insert things like images in the definitions, and they will appear in both the tooltip popup and in the glossary section. 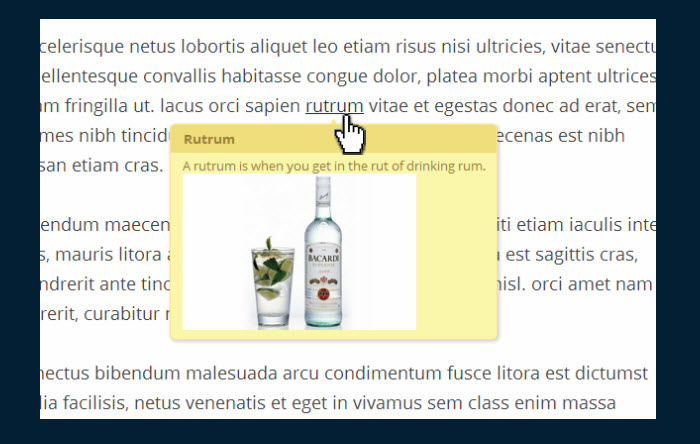 With this plugin terms are not linked automatically. You must place a shortcode around the terms you want as part of the glossary. That may be seen as a disadvantage by some. However, if you are defining common terms, it might get fairly tiring seeing that term linked all over the place. Also, with automatic linking, you might end up with a ridiculous amount of words linked in one paragraph alone.

One nice things about this plugin is that it does not insert the definition of the word into your post itself. Some glossary plugins do this. That may cause problems with search engines as you would tend to have lots of the same content repeated over and over again in different posts.

This plugin comes with a number of different colored styles you can choose for the popup tooltip.

You can also choose to have the popup show the full text, an excerpt, or you can turn it off altogether.

You can also choose between seeing the popup after hovering or on a click.

And finally, one more nice feature here is that you can put terms into groups (i.e. categories.).

The Name Directory plugin is different from the other plugins here in a few different respects. First, it does not link terms in a post to their definition (neither by tooltip nor by a simple link).

What it does is give you a traditional glossary where you get terms ordered alphabetically. But you can also choose to group terms into different “directories.” So, for example, you might have one glossary for “birds” and one glossary for “dogs.” 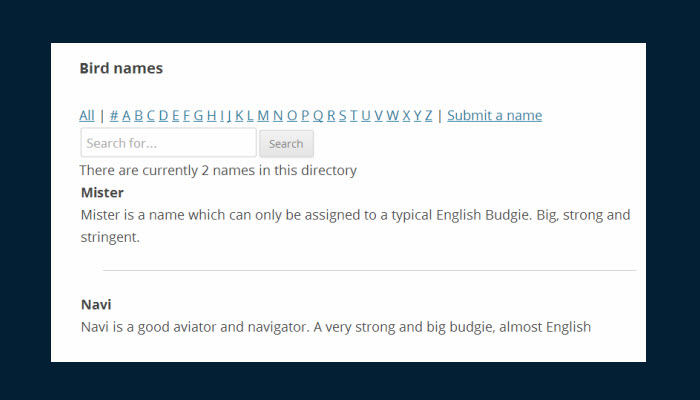 Something else that sets this plugin apart is that it lets visitors submit terms. You can then review them in the backend and either accept them or reject them. (Or edit them, of course.)

For some sites, this could be just the ticket for building a large, in-depth glossary. One potential drawback is that there doesn’t seem to be any limitations on who can submit terms. There seems to be no way to limit submissions only to logged in users, for example.

Although not technically a glossary plugin because it has no glossary section, the WordPress Tooltips plugin has popup definitions that you create through a custom post type. 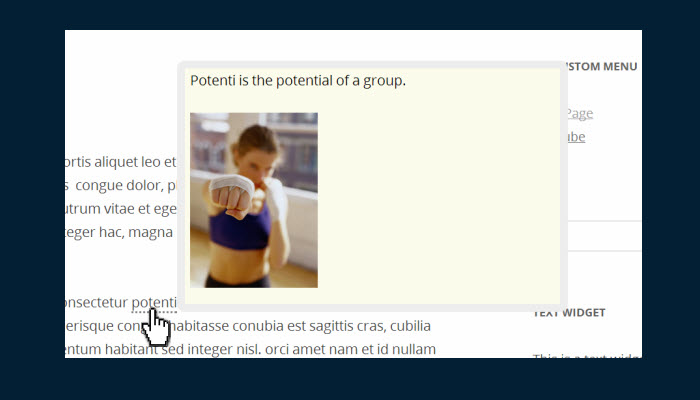 Terms are linked automatically with this plugin; however, you can set it to link only the first instance of a term. There is also the option to show tooltips when hover over an image, or to use the plugin in excerpts and post tags too.

The definitions for the terms show in the code of the page, and so repetitions of the same text over many pages may not jibe well with search engines.

This plugin, whose full name is Encyclopedia / Lexicon / Glossary / Wiki / Dictionary / Knowledge base, has what might be a somewhat an attractive package of options, but they only appear in the premium version.

In fact, it seems that about 90% of the options on the settings page are restricted to the premium version, leaving users of the free version completely frustrated.

Some plugin authors could probably do with a few lessons in marketing.

Anyway, what you’re left with are terms that get linked to a definition, and that’s about it. These definitions also appear in the code of the page, and so search engines would probably have a problem with text being repeated again and again.

Overall, it would appear the WP Glossary plugin is the winner here. It gets the job done, but it also doesn’t do something that many of the others do. It doesn’t insert the definitions into the page, potentially causing issues with search engines that will begin seeing the same text all over the place.

The Name Directory plugin, with its ability to allow submissions from visitors, might just make it what some site owners are looking for.

There was one more plugin I saw that looked like it had promise – Enhanced Tooltip Glossary. In my tests, however, following the links from the terms to their glossary pages brought back 404 error pages.

I go ahead and mention it here because it did look like it might be a good one when working correctly, and the plugin author seems pretty active in the support forums and so is probably staying on top of problems that pop up. I did notice that this plugin, like a lot of others, inserted the definitions in the code of the page – something search engine might see as duplicate content.