The Ultimate WordPress Social Plugin? Shareaholic Gets a Major Update

Having said that, I don’t have my head stuck in the sand, and am fully aware that Shareaholic is an enormously popular social sharing plugin. And since they released a major update just a few days ago, I thought it would be best to take a look and see what’s changed.

It turns out that the answer is “rather a lot”.

Since its creation, Shareaholic has been a social sharing plugin. You install it, set it up, and then you get some funky little sharing buttons on your posts:

Not bad, right? The intent of Shareaholic has always been to make sharing a fun experience for the user – to draw them into sharing with funky responsive graphics. And with over 1.6 million downloads at the time of writing, they appear to have succeeded.

With that concept firmly nailed down, Shareaholic has looked to expand the plugin’s capabilities. It seems apparent to me that they intend to become a one stop shop for WordPress users’ social sharing needs. Let’s take a peek at the additional features that have been added.

I first thought that this feature was a widget for links to social media networks, but the classic bookmarks are just a cosmetic change to the sharing buttons:

I’ve got to admit – I’m not particularly inspired by this. Perhaps the buttons will suit certain bloggers, but I am surprised that Shareaholic has decided to add a whole new section to their plugin just for different icons. Surely a choice of different sharing buttons could be integrated directly into the original settings screen?

Moreover, the rather plain appearance of these buttons seems to heavily contradict the concept that Shareaholic is supposed to make sharing “fun”.

As you might expect, this feature adds a bar to the top of your site, containing social sharing buttons:

The success of Hello Bar has proven that such positioning works, but I must admit to being left underwhelmed. The main selling point of this feature is that the sharing buttons stay on your screen at all times, but to me it seems like more of a poor compromise to Digg Digg’s floating buttons.

This is a bit of a confusing one. Shareaholic is a social sharing plugin, but for some reason they’ve thrown in a recommended posts feature into the latest version:

I’m not sure how this relates to social sharing. Sure – adding recommended content to the bottom of your posts is a great idea and can increase engagement. But the logic for including this in Shareaholic evades me. With proven plugins such as YARPP out there, what are the developers trying to achieve?

I wanted to finish on what I consider to be an excellent feature, as I wouldn’t want you thinking that I am pouring hatred on Shareaholic (far from it – I’m bemused by the new features, if anything). 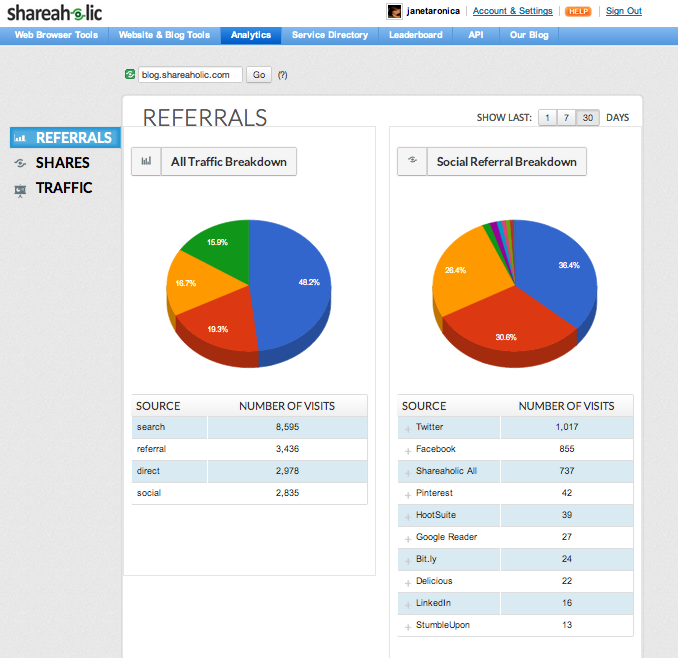 If you’re interested in where your social traffic is coming from, and how, the analytics alone may be worth the installation of Shareaholic. Here’s a breakdown of the key features:

Shareaholic are really pushing this as a major new feature, and with good reason – I haven’t seen anything else like it in a WordPress plugin. In short – I’m impressed.

If you were going to give Shareaholic a test drive for any reason (beyond its basic sharing functionality), this would be it. So perhaps now is the time to give it a spin if you haven’t already.