Close
WPMU DEV Logo Reasons to, and not to, donate to Diaspora

Reasons to, and not to, donate to Diaspora

I’ve been watching Diaspora with interest for a fair while now – and it looks like they’ve just (or about to) run out of cash, as they’re asking for more. 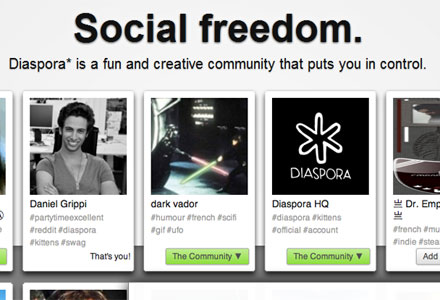 For those of you that haven’t heard of the project – Diaspora is essentially an open source Facebook alternative you get to host yourself, which arose pout of the (now much forgotten) great FB privacy hoohaw of a few years back.

And, of course, given our overriding interest in all things open source, and given that most people who can install WordPress, would probably be interested in a social networking platform that they can control (in addition to, cough, BuddyPress) – heck, it makes sense to discuss that here I reckon.

So without further ado, the question is… why should (or shouldn’t) you donate to the Diaspora project, to help them keep on plugging?

Reasons to donate to Diaspora

3. It’s open source, and that’s something we should support

4. And it is, really, the only viable alternative to a 3rd party (be it Facebook, Twitter or whoever) dominated social networking scene – surely there’s a heap of potential there.

But… those aren’t the only considerations, there are also

Reasons not to donate to Diaspora

1. It’s struggling for any sort of traction, and I know the below is hardly a great (or accurate) measure of success, but I think it illustrates my point (this site, wpmu.org, picks up 200k+ unique visits p/month) 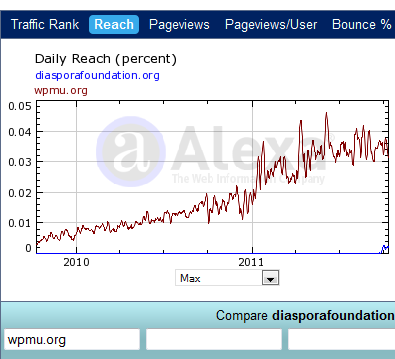 2. The dream of a social web run not being run off a centralized, commercial platform may well be completely fanciful (for example, I believe in our world WordPress.com is about to pass WordPress itself in the numbver of blogs hosted)

3. Doing so, would really mean you had to get involved with it, which would doubtless erode much of your time, energy and life… after all, we’ve gotta make time for Facebook and Twitter too, right?

4. Just read the comments of the RWW post, you;d certainly be in the minority that thinks it’s gonna work

But, but but, that doesn’t mean they are wrong, that it won’t gain traction and there isn’t hope for the project, or even a fork or idea inspired by it.

So, would you consider donating to Diaspora?