In case you don’t already know, we’re the folk not only behind this site and WPMU DEV, but also Edublogs… the oldest and second largest WordPress Multisite setup on the web, with, as of right now 1,451,943 teacher and student blogs hosted.

And today, our hosting company, ServerBeach, to whom we pay $6,954.37 every month to host Edublogs, turned off our webservers, without notice, less than 12 hours after issuing us with a DMCA email.

Because one of our teachers, in 2007, had shared a copy of Beck’s Hopelessness Scale with his class, a 20 question list, totalling some 279 words, published in 1974, that Pearson would like you to pay $120 for.

Update 25 May, 2017: This post is part of the WPMU DEV Blog archive and contains information that is out-of-date, but we’re keeping it on the blog for posterity.

I’ll get into whether or not this should be a legitimate DMCA in a moment, but in the meantime let’s focus on how quickly and pro-actively ServerBeach responded to Pearson’s lawyers, as opposed to how they deal with one of their better customers (we’ve been with them for years and years, ok we’re no WordPress.com – another one of their customers – but $75k+ p/year has to count for something right?)

Edublogs, as you might have guessed, is a blogging service for education, and like most blogging services allows students and teachers to sign up for free, and then upgrade if they want for extra storage, features etc.

And, like most blogging services, we’ve been heavily attacked pretty much since our inception by Sploggers (people, or machines, creating blogs to add links to other sites or promote their own badness) – so much so that we even developed and maintained the only dedicated Anti Splog service out there.

And, of course, sploggers don’t care much for copyright (neither do a lot of students, but that’s another story), and thus we invariably get a bunch of emails every day complaining about copyright issues, here’s how we handle them:

So, yesterday, when we got a DMCA notice from our hosts, we assumed it was probably a splog, but it turned out it wasn’t, rather just a blog from back in 2007 with a teacher sharing some materials with their students, see below: 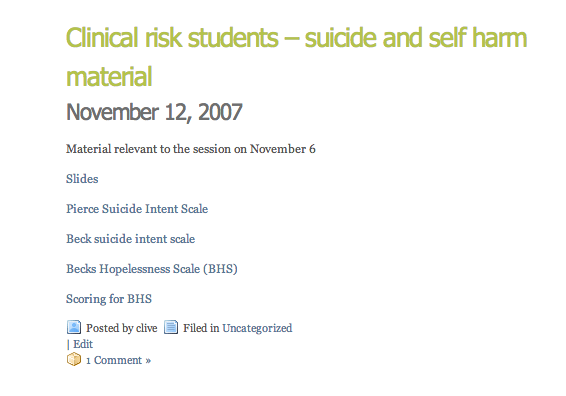 And the link they complained about specifically is still on Google cache, so you can review it for yourself, until Pearson’s lawyers get Google to take that down… or maybe Google will get shut down themselves ;)

So we looked at it, figured that whether or not we liked it Pearson were probably correct about it, and as it hadn’t been used in the last 5 years ‘splogged’ the site so that the content was no longer available and informed ServerBeach.

Clearly though that wasn’t good enough for Serverbeach who detected that we still had the file in our Varnish cache (nevermind that it was now inaccessible to anyone) and decided to shut us down without a word of warning.

Well, that’s not strictly true, they did send us the below:

Which clearly states that ‘your web server has been or within the next 24 hours will be, disabled’.

So, technically, this can happen to any customer of ServerBeach who may happen to host other people’s content, ooo, like WordPress.com without notice.

Here’s all that has to happen:

And then they inform you, or maybe they’ll give you 12 hours notice, if you’re lucky :/

Seems like a bad case of judge, jury and executioner… and an even worse case of stupid automated systems and utter ignorance of your customers.

Now, back to the offending content, here’s a ‘fair use’ sample:

Now, like I said, the list only runs to 20 questions, sub 300 words, and I think is a pretty important and useful resource for teachers to share with their students.

But clearly Pearson isn’t making enough money already, and intends to, rather that let this 38-year old work be shared, discussed, used, even in a way that might save some people’s lives, on the internet.

Instead it wants a regular teacher to handover $120 for it.

Here’s another idea Pearson, maybe one that you could take from Edublogs, howabout you let this tiny useful list be freely available, and then you sell your study materials / textbooks and other material around that… maybe use  Creative Commons Non-Commercial Attribution license or similar to make sure you get some links and business.

Or at the very least contact us directly about it.

Rather than being assholes and stuffing up hundreds of thousands of teachers and students through getting your lawyers to lay into our less-than-satisfactory hosts :(

Addendum 1 – I contacted ServerBeach 5 hours ago to ask them how this could happen, and tell me ho wit won’t happen again, they have offered since to explain the DMCA to me, not really what I was after, I’ll update here with any response.

Addendum 2– ServerBeach have responded that apparently they contacted us 10 days about this through their automated system… needless to say it either wasn’t sent or we didn’t get it, but they figured that they’d just shut down our servers regardless without doing something simple, like, calling any of the 3 numbers for us they have on file…