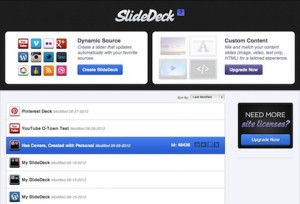 It was only last month that I announced the release of SlideDeck 2.1, with some pretty awesome new features.

Not ones to rest on their laurels, the folks at Digital Telepathy quickly got back to work, adding Pinterest to the available content sources just a few days ago.

But perhaps even more interestingly, they quietly released a free version of SlideDeck 2 just five days ago. Despite the release not being mentioned anywhere on the web (that I am aware of), the plugin has already amassed over 2,500 downloads, and a perfect star rating.

So what’s the fuss all about?

Whilst Digital Telepathy are not about to give away the farm with their new release, they did want to produce something that was useable as a standalone product – rather than just a teaser for the paid version. Jason Amunwa, the Director of Products, had the following to say:

Our goal was to create a version of SlideDeck that gives people an incentive to upgrade, but is powerful enough to serve as a great slider plugin for many people’s needs.

If you’re wondering what the limitations are, here’s a list:

If you want a fully fledged version of SlideDeck for free, this is not it. But it is still a great slider plugin, available at no charge.

If you’re looking for a slider plugin and are satisfied with the features listed above, or you’re not yet ready to shell out on the paid version of SlideDeck, you should download this now and give it a test drive.