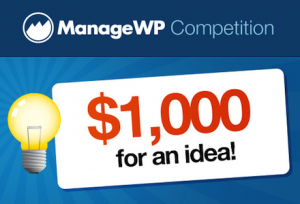 ManageWP has experienced a meteoric rise over the past 18 months. We first took note back in March 2011 when Sarah reviewed the beta version of the multiple WordPress site management tool. Then in December we interviewed Vladimir Prelovac, the brains behind the operation.

When ManageWP officially launched in January of this year, we were eager to check it out (and subsequently gave it a glowing review). Whilst it has had its problems (such as the furore regarding the pricing model), ManageWP is well and truly established as the leading multiple WordPress site management tool.

And now, the ManageWP development team are looking to take another major step towards producing the best product that they can.

Crowdsourcing is all the rage these days – after all, who best to seek new feature ideas from than the people who will be using the product? With that said, a lot of the features that have been added to ManageWP since its inception have been user-driven.

And that fact brings me to ManageWP’s rather bold initiative – a competition in which they will award one person $1,000, just for an idea. That’s right folks – the best new feature suggestion for the ManageWP tool will net someone a cool grand.

So what are you waiting for? All you need to do is sign up for a free ManageWP account here, then submit your feature suggestion(s) via the dashboard. If you want to read more about the competition, you can check out their official blog post here.