WPMU DEV Logo What to Expect in WordPress 4.1: Distraction Free in Anyone’s Language

What to Expect in WordPress 4.1: Distraction Free in Anyone’s Language

While WordPress 4.0 was “just another release” as far as semantic versioning goes, many in the community were disappointed. After all, “4.0” seemed like such a nice, round number and thinking back to the huge number of features in WordPress 3.0, people had high hopes. In a sense, the public has been trained to hear a x.0 release as being a step forward and WordPress 4.0 didn’t deliver.

So with WordPress 4.1 expected to drop sometime next week, what can we expect?

For a start, we can look forward to at least three great features – a new default theme, an improved distraction-free writing mode and easy language access.

To me, it seems like 4.0 and 4.1 should have been merged into one big 4.0 release; this would have made everyone a lot happier!

In this post, we’ll go on a mini journey through WordPress 4.1 and what we all (hopefully!) will be updating to next week.

One of the most prominent features of the upcoming release is the inclusion of a new default theme. I recently reviewed Twenty Fifteen and my verdict is that it is one of the best default themes to date.

It will feature a much cleaner look than Twenty Fourteen and focuses on getting back to basics. It’s a great example of how less is more; more can always be added with plugins. I recommend checking out the demo website to get a feel for it.

The new distraction free mode is an effort to streamline the post editing process. Existing version of WordPress give you access to the fullscreen mode, enabling you to write without distraction. The problem is, it also hides everything and you can only access all your tools if you exit fullscreen mode.

The new distraction free mode solves this by hiding everything except for post editor when you start typing. When you click escape, or move your mouse outside the editor, everything floats back in.

This feature is somewhat disorienting at first, but after using it for a while, I quite like it.

One downside of this mode is that as soon as your mouse moves out of the editor, things slide back in. If you tend to wiggle your mouse about quite a bit, this may be a bit annoying.

The problem is dampened by the fact that the position of the editor always remains fixed, so your eyes don’t need to wander, but I think some people will still prefer the old fullscreen editor. It would be a good addition to enable the new mode by default, but allowing people to switch back to the old version in the settings.

Languages can now be installed with minimal hassle. There’s a new language switcher in the general settings, which shows you installed and available languages.

Choosing an available language will download the selected one from WordPress in the background and apply it to your installation. Very smooth and very fast. 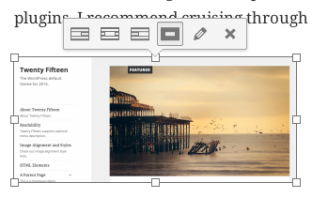 A new toolbar has been added to images on hover in the post editing area. This is now much more handy with easy access to alignment, and looks the part as well.

As with all UI additions from 4.0 and 4.1, I really appreciate that WordPress is making an effort to make existing systems better instead of just jamming in new features.

Outputting the title of the website (seen in the browser tab) has been a bit difficult. With 4.1, we’ll finally see that change through add_theme_support( 'title-tag' ). The header.php file for Twenty Fifteen simply doesn’t have a title tag in it anywhere, it is added through the declaration of theme support and in the end it is added through the wp_head() hook.

The plan is to enable users to manage these titles from the backend a bit later. Right now this feature will not be terribly plugin friendly and authors are discouraged from building functionality around it at the moment. To add full backwards compatibility but still leverage the new way you can use the following:

Many improvements to WordPress queries are slated for 4.1. Most prominent of these is WP_Meta_Query which has been rewritten quite a bit, resulting in quite a few improvements. I use meta queries extensively so this is a welcome improvement for me.

The official blog entry from the end of October has an excellent example. Say you work in real estate and you store the city and the state of each item in a meta field. You can now get posts from the city Miami in Ohio or Augusta in Maine. The query would look like this:

In addition, WP_Comment_Query is getting some features, namely the addition of ‘comment__in’, ‘comment__not_in’, ‘post__in’ and ‘post__not_in’ to the query arguments.

A number of modifications are being added to the Theme Customizer API. You can read about the efforts in detail on the WordPress website.

Contextual panels and sections will be available, which serves to de-clutter the interface. When using $wp_customize->add_section() you can pass a callback, which can enable/disable the section based on the currently viewed URL.

As a theme author I would recommend using this cautiously. Those users who know about the customizer at all think that it is a compendium of all options. If you make sure search options are hidden except when on a search page your users may never find these options.

While I think the direction is good, additional UI improvements will be needed to make sure that users can get to all options even if not on a relevant URL.

Keeping Up With Development

If you are interested in keeping up with the status of WordPress 4.1, I suggest reading make.wordpress.com, specifically posts tagged with 4.1. This is an especially good idea for developers. For example, right until November 26 it seemed we would be seeing term splitting in 4.1.

Due to some complications the core team have discussed that it would be best to defer this to 4.2. While the big features we’ve discussed here won’t change too much, it’s always worth taking a peek at the current status every now and again.

My conclusion is that I very much like the direction WordPress has been/is moving these past months. I like that existing systems are being revisited and there is considerable focus on UI. For my part I was pretty happy with 4.0, even though it didn’t bring that many new features.

I think that adding exciting new things is great but it only leads to short-term gain if done hastily. A huge system like WordPress can only thrive if they take care of their existing systems and focus on their users like they are doing now.