This guide provides an overview of the factors impacting your storage usage and provides some suggestions regarding efficient storage management.

“Storage” refers specifically to the SSD storage capacity provided with each of our hosting plans. Features like dedicated RAM, CPUs, and bandwidth are essential performance factors but have no impact on storage capacity or usage.

It’s important to understand that the speed, security, and stability of WPMU DEV hosting relies heavily on a highly-structured server environment in which each member’s files exist in a dedicated virtual private server. When we refer to “your files”, we’re not talking simply about your content, but also your WordPress core files, backups, staging sites, plugins, integrations, and themes—all of which are protected in their own virtual world with zero shared resources.

Our managed hosting plans provide robust storage support at each plan level but are not intended to saddle members with storage space they don’t need or force them to pay for excess performance capacity just to increase their storage. Instead, we recommend taking advantage of the free storage that comes with some of our premium plugins or subscribing to third-party storage services likes Amazon’s S3, both of which we discuss in more detail below in Before You Upgrade.

Let’s begin with an overview of how your files are categorized and stored.

You can monitor your storage usage in the Storage tab of your Hosting Hub, located here: Hub > Hosting > Choose site > Hosting > Analytics > Storage.

From the Hub, click the Hosting tab. Then click any site name to open the Overview for that site. 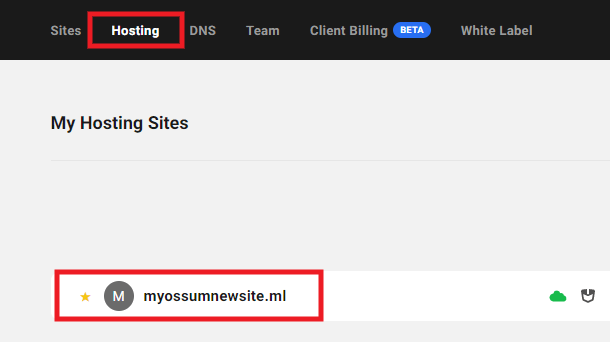 Navigate to the Hosting tab and then the Analytics sub-tab. 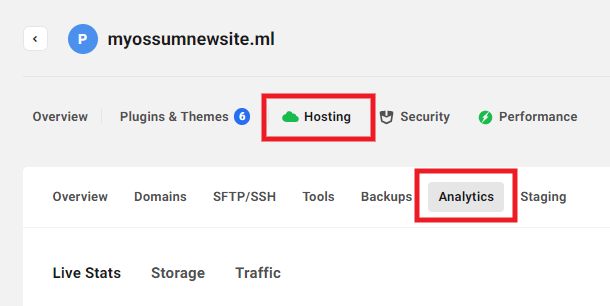 Click the Storage tab to reveal a detailed breakdown of the storage usage for the selected site. 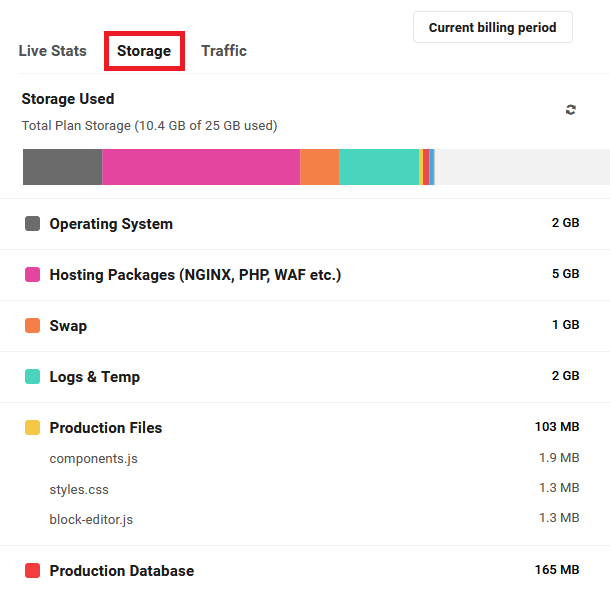 The chart at the top shows how much of your Total Plan Storage is in use, including the portion reserved for system use, with the colored segments indicating the relative size of the various data types. The chart is refreshed every six hours, but you can manually refresh the data anytime by clicking the refresh icon next to Storage Used. See About System Storage below for a detailed breakdown for each hosting plan.

Your stored data can be broken into three categories: production, staging, and backups. Your data exists within these categories either as an actual file or as data added to your WordPress database.

These are the types of files stored in each category:

Each site on WPMU DEV’s Managed WordPress hosting is created on a highly configured Virtual Private Server with dedicated resources and storage space.

System Storage refers to everything needed to create and efficiently run your site. The amount of storage reserved for system use differs slightly depending on your hosting plan, as follows: 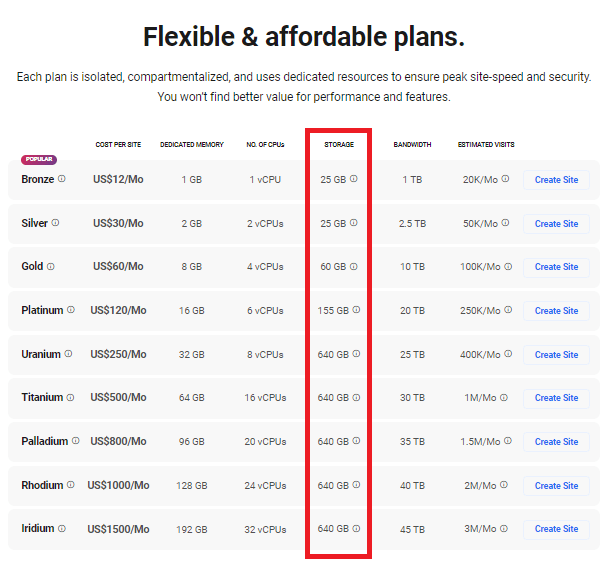 Unlike some hosts where you can have multiple sites installed on the same server, nothing here is shared between any other sites.

This means that, for each site, a full server stack is created, and each server requires independent resources with the following storage allotments:

This is the Linux backbone of your site. It manages the memory, all of the system software processes, as well as all communication between software and hardware.

System Software includes all the software packages needed to run your site, including:

SWAP is a space that is normally used when RAM memory is full and the system needs more memory to manage running processes. Inactive pages will be moved from RAM to the swap space if and as needed.

This is the directory where all your server logs, and any temporary files created by system processes, are stored.

Our daily hosted backups provide more than adequate protection for most sites. While it is not unreasonable for a user to occasionally trigger a manual backup just before they initiate changes to a site, hosted users who regularly create additional backups using the manual backup feature in the Hosting Hub, and do so for no significant reason, are consuming storage space unnecessarily.

To be clear, our incremental backups use very little storage space; however, if you’re pushing the limits of your current storage capacity we recommend not making matters worse by creating needless backups.

When available storage gets low, it’s not unusual for web admins to look for unnecessary files, plugins, or themes to delete. There are a couple of problems with that approach, however.

First, if your site has enough unnecessary files to make a significant impact on storage usage, then you’re not keeping up with your day-to-day housekeeping chores. Unused files should be deleted, archived, or moved to offsite storage as soon as you know they’re no longer needed, and should never accumulate to the point that they consume a significant amount of production storage.

Second, just because a file is no longer needed for your site, doesn’t mean it isn’t needed elsewhere, most commonly as part of a previous backup. Deleting files from production might make your site smaller, but will have little or no impact on your total storage usage; at least, not until the next full backup.

Take a look at the screenshots below. In this case, a user deleted more than 70MB of files and other data from the production side in an attempt to free up some storage space. Notice that while production storage shrank, Backups Overhead increased by almost the same amount, and the impact on total storage usage was negligible. This is because the deleted files were still associated with the site’s last full backup and cannot be removed until that backup has been replaced by a full backup in which those files are no longer present.

Remember, a backup is a complete copy of a site at a given point in time that can be restored if something unforeseen renders your production site unusable. In order for that to work, all files associated with your site when it was last backed up must be preserved until another full backup is made. When the user in the example above deleted those 70MB of data, the only thing that changed was how those files were categorized for storage purposes.

Note that we do not allow members to delete our hosting backups because those backups are a part of our commitment to protecting your site. Besides, there are much better ways to reduce your storage usage than deleting backups, as discussed below in Before You Upgrade.

Did you know that WPMU DEV supports multiple ways to backup sites, including hosting backups, managed backups, and backups created with either of two versions of our Snapshot plugin? To help you make an informed decision on which backup option is best for your project, see our Backups FAQs doc.

If you’re not using a staging site, we strongly recommend that you do. The benefits of a staging site far outweigh the storage usage, which is typically only a fraction of that used by the production site.

The image below shows a fresh staging site created from a site almost 1GB in size. As you can see, the staging site before any new content is added is a little more than one-tenth of the size of the production site. 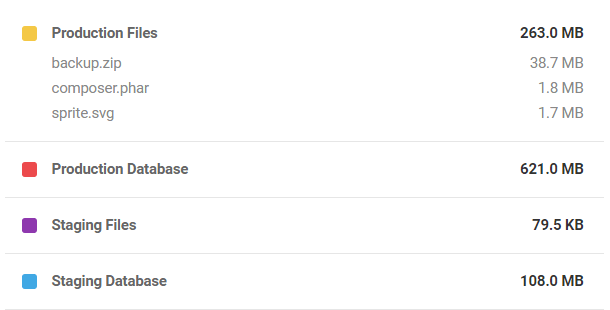 A staging site will grow in size, of course, as you add files to it, but as soon as it’s pushed to production, its share of storage usage will drop back to its original state. Additionally, we do not backup staging sites, so they do not contribute to your Backups Overhead storage.

There is, at a minimum, 10Gb of free storage available to every member via our Snapshot plugin. Add to that the savings most sites can achieve by compressing images with Smush and, if all you need is a few more Gb of storage, upgrading your hosting plan may not be necessary just yet.

As explained above, WPMU DEV hosted sites have little need for backups beyond the hosted backups we provide. Our daily, incremental backups and regular full backups are more than adequate for most sites. That said, if you’re going to create additional backups, we recommend you do so using Snapshot, our premium backup plugin.

With Snapshot, you can create custom backups that will not impact your hosting storage and, if configured properly (meaning you only backup your content and not your themes, plugins, etc.) you can squeeze a lot of backups into the 10Gb of free storage we offer. In addition to that, more backup storage is available for about 10 cents a Gb. See the Snapshot plugin page for a detailed explanation of its features.

Smush Pro is our highly-rated premium image compression and image-serving plugin that will save you space by compressing your site’s images. You also get up to 10Gb of monthly bandwidth via our CDN, which will serve your images over a 65 Tbps server network from 45 locations around the globe. See the Smush plugin page for a detailed explanation of its features.

Cloud storage has come a long way in the past decade, and today there are many cloud storage providers. We encourage users to consider their options before choosing, but for our money, Amazon’s Simple Storage Services, or S3, sets the standard for cost, scalability, and reliability. This is why we’re integrating it with as many of our plugins as possible, including Snapshot.

S3 was built as a developer’s tool, but in reality, it now serves millions of non-development customers looking for simple, inexpensive cloud storage. Aside from its affordability—less than a penny per gigabyte—S3 is built on the same network that serves Amazon’s own sites. According to Amazon, the company loses $20,000 for every second one of its sites is down, so users can be sure that doesn’t happen very often.

Cloning Sites
Storage
Back to Documentation

24/7 livechat support for all things WordPress

Try our all-in-one platform free for 7-days and see how much easier running and managing your WP business becomes.